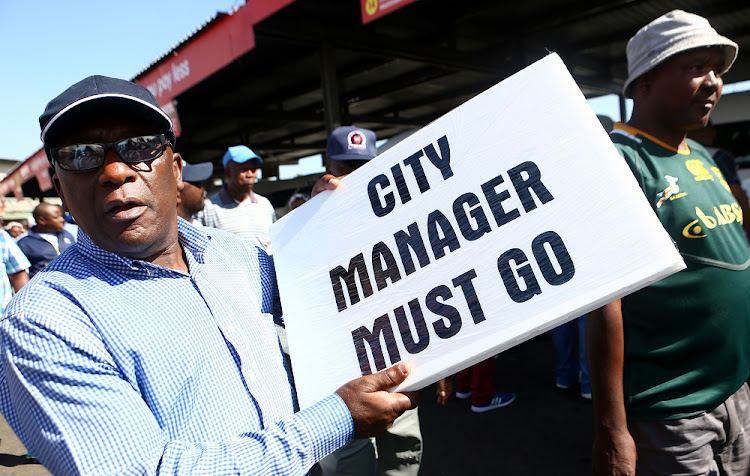 A taxi driver from Ekurhuleni with a board before marching to the office of Mayor Mzwanele Masina demanding for his resignation.
Image: Masi Losi

The City of Ekurhuleni will meet the Ekurhuleni Taxi Industry (ETI) on Friday following a strike on Tuesday.

City spokesman Themba Gadebe said on Tuesday afternoon that the strike was peaceful and the strikers dispersed after Transport MMC Petrus Mabunda received their memorandum.

Ekurhuleni Metro Police spokesperson Kobeli Mokheseng about 100 taxis obstructed the traffic between 9am and 11am by driving at “tortoise pace” on the R21 and the N3.

“Today we were anticipating the worst and they conducted themselves professionally.”

The taxi industry demanded in their memorandum that mayor Mzwandile Masina and city manager Imogen Mashazi should resign within 30 days. They said if the pair do not resign‚ there will be “disruption of the transport service on a sustainable and prolonged manner”.

ETI is unhappy and claimed they have been trying to speak to Masina for almost two years about the ongoing negotiations and “unending” construction of the Harambee Bus Rapid Transit (BRT). They gave the city 30 days to respond.

The police earlier set up a perimetre outside the council offices with barbed wire before receiving the memorandum.

Commuters were stranded on Tuesday morning after busses were suspended due to the strike that started at the Germiston taxi rank.