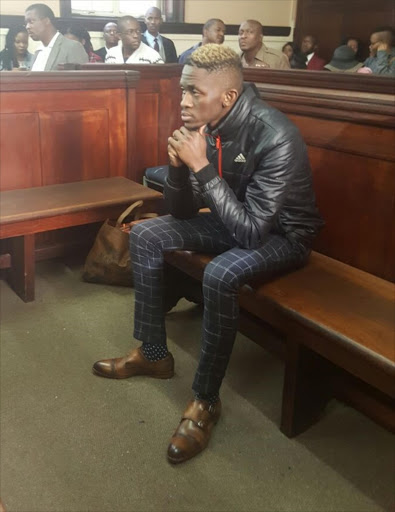 The man alleged to have been behind the murder of his on-and-off girlfriend Karabo Mokoena on Monday told the Johannesburg High Court he had been beaten in prison.

Sandile Mantsoe’s lawyer Victor Simelane said his client had been assaulted by a prison warder at the Johannesburg Correctional Services on March 5 when he returned to the facility from court: “My client was severely assaulted and we are having a hard time getting the police to investigate.”

Dressed in a checkered suit‚ Mantsoe did not appear to have any visible injuries. The judge made a note of the incident and ordered Simelane to follow it up with the officials.

The 28-year-old Mantsoe has been behind bars for months after he was denied bail in the Johannesburg Magistrate’s Court. The forex trader is accused of brutally murdering his 22-year-old girlfriend in April last year. Her charred remains were found in a shallow ditch in Lyndhurst.

Developments which surfaced at the eleventh hour on Monday led to the postponement of the trial against Forex trader‚ Sandile Mantsoe‚ accused of ...
News
4 years ago

During his bail application the married father of three‚ who is estranged from his wife‚ denied killing Mokoena‚ saying he came home from a business meeting on April 28 and found she had committed suicide in his Sandton apartment. The pair had been together earlier in the day. He did not specify how she had died.

Mantsoe claimed that out of fear and panic that he would be blamed for the death‚ he disposed of her body. He drenched it in pool acid and petrol‚ put a tyre around it and set it alight. The body was found a day later with only certain parts still recognizable.

After not hearing from her for days Mokoena’s family and friends went on a frantic search‚ circulating her pictures on social media‚ unaware that a badly burnt body which lay in a government mortuary was hers.

During the bail application‚ the state submitted that Mantsoe had told police that he had killed Mokoena to sever a blood ritual that had been performed to strengthen his business. His business had reportedly started to fail once he and Mokoena parted ways. Mantsoe however denied these allegations.

A post-mortem examination failed to deduce what had killed Mokoena as her body was too badly burnt. The state submitted during the bail application that Mokoena could have been alive when she was set alight.