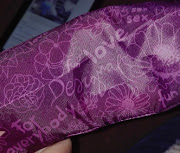 'What message are we sending to our children with this?' Ilse Olsen asked after noting one of the dresses for a doll she bought her three-year old had the words 'sex', 'love' and 'fun' on it. Image: Facebook/ Ilse C Olson

Clothing retailer Jet Stores had to pull the Beauty Fashion Charming doll collection from their shelves after customers raised concern over the words “sex”‚ “love” and “fun” printed on its dress.

A Worcester mother got the shock of her life when she saw the word “sex” written all over her three-year-old daughter’s doll’s dress.

Ilse Olsen‚ a former Grade R teacher‚ had purchased the doll at a Jet Store earlier this month. At the price of R50‚ the doll comes with five dresses‚ a mirror and a handbag.

Speaking to the publication this week‚ Olsen said that while there was nothing wrong with the other four dresses‚ she freaked out when she saw the words “love”‚ “fun” and “sex” for everybody written all over the fifth dress.

“My daughter is only three years old. What message are we sending to our children with this? I would have confronted the shop manager but only became aware of the dress when we unwrapped the box here at home. I am still shocked by this; I really didn’t expect it on a doll‚” she said.

Good morning‚ I just want to share my concerns with the community. My husband and I went to Jet in Hoog Street yesterday and bought our daughter a doll. One of the dresses that come with the doll has vulgar words on them. Where is our society heading to if children’s toys carry such nasty messages?

Olsen‚ who went to store to purchase a pair of white shorts for a weekend getaway‚ said her daughter‚ who was with her father in the toy department‚ came rushing to the till with the box. Olsen said she had no time to look or notice if there was anything untoward until she got home.

The mother of two has since posted her discovery on the Boland Dorpe Gemeenskapnuus blad Facebook page‚ alerting other parents.

Her post read: “Good morning‚ I just want to share my concerns with the community. My husband and I went to Jet in Hoog Street yesterday and bought our daughter a doll. One of the dresses that come with the doll has vulgar words on them. Where is our society heading to if children’s toys carry such nasty messages?”

The post was received with mixed reaction from social media users. Some felt there was nothing wrong with the words on the dress‚ while others felt it was inappropriate for a three-year-old and that she should bring it to the attention of the store.

The thirty-year-old mother said she has stashed the toy far away from her daughter and seven-year-old son until she can get time to confront the store. She has not had time to go back to the shop.

“My daughter still cannot understand why she can’t play with her toy. I explained that it had inappropriate words on it but she is still too young to understand what I am talking about‚” said Olsen.

General manager of Edcon corporate affairs Vannie Pillay said they removed the Beauty Fashion Charming doll range at Jet Stores soon after they were made aware that there was an issue around it‚ and are conducting an internal investigation on the matter.

This was not the first incident where a retailer had to recall children’s products.

Earlier this year‚ international clothing retailer H&M was called out by customers for posting photos on its website of a young black boy in a hoodie reading "Coolest Monkey in the Jungle”. This was seen as racist and prompted several demonstrations by the Economic Freedom Fighters (EFF). Several H&M shops in South Africa were trashed and closed.

Last year‚ a German doll manufacturer‚ Zapf Creation‚ recalled the My Little Baby Born Walks doll after a mother complained that it taught her daughter to swear.

Two years ago‚ McDonald’s South Africa had to recall a swearing minion toy.