'SABC interim board had no powers to fire Hlaudi Motsoeneng' 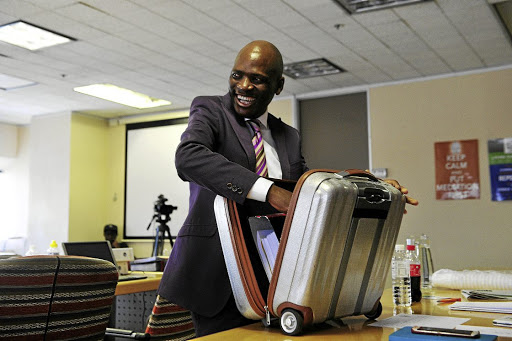 In his bid to get his job back, former SABC boss Hlaudi Motsoeneng has claimed that the interim board that fired him had no power to do so as, by then, he was no longer a top executive at the public broadcaster.

Motsoeneng's legal representatives argued in his arbitration case yesterday that a Memorandum of Incorporation (MOI) existing at the SABC at the time meant that the interim could only fire the broadcaster's three top executives - the chief executive; chief financial officer and chief operations officer.

They argued that Motsoeneng held none of these jobs when the interim board, headed by then acting chairwoman Khanyisile Kweyama acted against him.

"We will submit that the board of SABC did not have the powers to institute disciplinary proceedings against Mr Motsoeneng... what should have happened is that there should have been compliance with the disciplinary code [of the SABC].

'Hlaudi Motsoeneng must pay back R43m'

"Every single cent must be recovered from him."
News
4 years ago

"The disciplinary steps taken against him were procedurally unfair based in compliance with the MOI," said Advocate Kgomosoane Mathipa for Motsoeneng.

He read out a clause from the MOI and then asked Kweyama, who is now deoputy chairwoman of the current board, if it gave the board powers to fire anyone else other than the top three executives.

Kweyama replied that there were other documents within the broadcaster's
policy which have clauses that gave the board powers to terminate employment contracts of any employee at the SABC.

"There are other documents that govern the relationship of the board with other employees. There is a board charter and board's terms of reference that talk to
employee matters," she said.

This was in response to the fact that when the board fired Motsoeneng, he had been suspended pending the outcome of a disciplinary hearing, which found him guilty and recommended that he be fired.

The board then took a resolution to fire him on June 12.

"We don't agree. The acting CEO was the highest level of manager, so in any
hierarchy, the next level [of discipline] would be the board. The board couldn't conduct the hearing themselves, that is why we put it to an independent person," said Kweyama.

At the time of the hearing, Motsoeneng was facing charges of bringing the SABC into disrepute and breaching the terms of his suspension following a media briefing he held in Parktown, Johannesburg, on April 19. Motsoeneng is fighting his dismissal at the CCMA.

The case will commence on May 2.