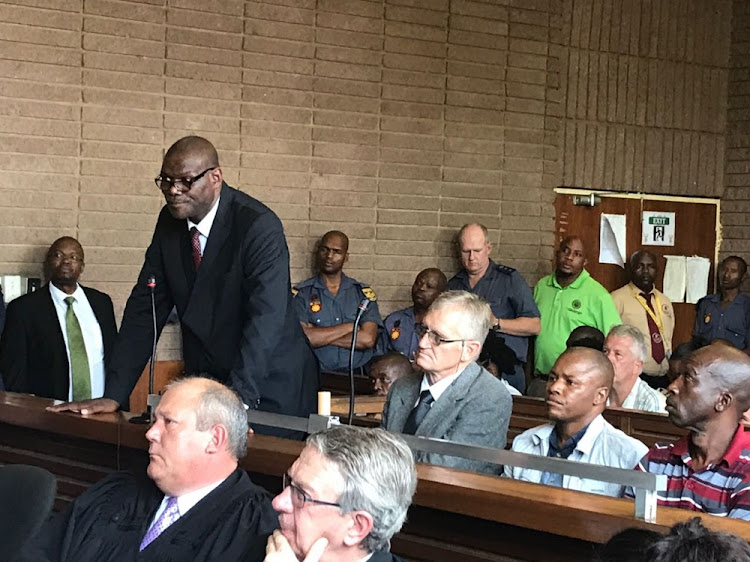 Former North West Deputy Police Commissioner William Mpembe is one of six men facing charges of murder in connection with the 2012 Marikana murders.

Mpembe‚ along with Gideon van Zyl‚ Dingaan Madoda‚ and Oupa Pule‚ is charged with defeating the ends of justice after they failed to report the death in custody of Modisaotsile Sagalala on August 16‚ 2012. They allegedly attempted to pass on Sagala’s death as that of Andrew Saffey‚ who died in hospital on August 16 2012.

The former deputy police commissioner is further accused of contravening section 6 (3) of the Commissions Act after he allegedly gave false evidence at the Farlam Commission of Inquiry that Sagalala had died in a police truck on August 16 2012.

The matter against Van Zyl‚ Madoda and Pule was postponed to June 18. Mpembe‚ along with Vermaak‚ Mguye‚ Mogale‚ Sekgweleya and Makhubela‚ has submitted a formal bail application. Their matter is in connection with an incident on August 13 2012‚ in which striking miners were stopped by police while making their way from the Lonmin mine to the koppie.

Joseph Mathunjwa‚ president of the Association of Mineworkers and Construction Union (Amcu)‚ on Wednesday told the Sowetan that he was disappointed that only nine officers were arrested.

“It’s evident that these officers did not act unilaterally. There should have been more arrests‚” Mathunjwa said.

Three days after the murders‚ police shot dead 34 miners and wounded others while attempting to bring an end to a protest for better wages. When the strike ended‚ 44 people had been killed.