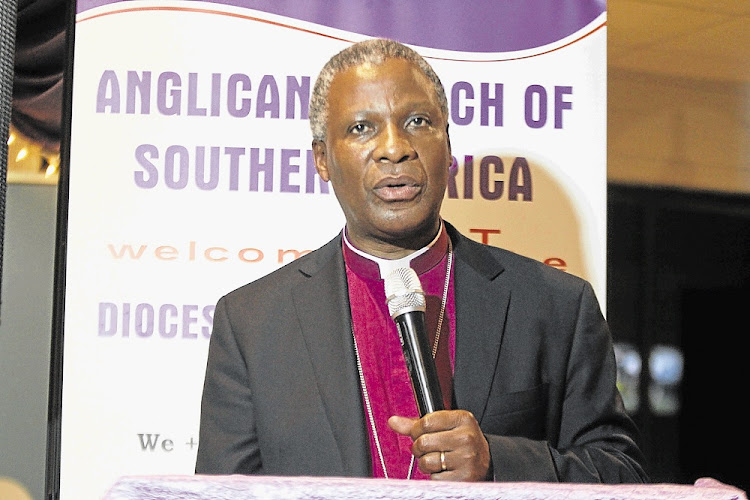 Archbishop Thabo Makgoba said on Tuesday that he took responsibility for cases of abuse within the Anglican Church‚ even when it happened under the watch of his predecessors.

He was speaking after award-winning author Ishtiyaq Shukri issued a statement earlier this month that detailed years of abuse at the hands of priests in Kimberley.

Shukri’s revelation came in the wake of Archbishop Emeritus Desmond Tutu’s resignation as an ambassador for Oxfam amid a sex scandal that has rocked the international aid organisation.

Shukri said this resignation was hypocritical because Tutu had been silent on sex scandals in the church.

Tutu’s office said the 86-year-old was “mortified” to hear about what happened to Shukri.

Makgoba said on Tuesday that the Synod of Bishops of the Anglican Church of Southern Africa was “shocked and distressed” to hear a report on Shukri’s situation at a meeting. He said Shukri had been in contact with one of the church’s bishops.

“I understand that he is unwilling to go into detail or name the person or persons who abused him. While respecting his wishes‚ we usually urge victims of abuse to lay charges with the police and with church authorities. The police are often better equipped to investigate cases than we are‚ especially in cases which go back many decades and may have occurred in dioceses whose former leaders have died‚” he said.

“As the current Archbishop of Southern Africa‚ I take responsibility for what has happened during the time of my predecessors. Where we have wronged or failed anyone‚ we beg their forgiveness. I am committed to giving the ‘Safe Church’ initiative significant attention‚ especially when abuse has been reported and nothing done about allegations.

“Every human being deserves to have the dignity bestowed on them by God respected. Anyone who demeans this through any form of abuse demeans themselves and God. Abusing others is unbiblical and cannot be condoned‚” he said.

South African author Ishtiyaq Shukri has lashed out at Archbishop Emeritus Desmond Tutu over his decision last month to step down as an ambassador ...
News
3 years ago

Meanwhile‚ a close member of Shukri’s family – whose name is known to TimesLIVE – urged the author to release his alleged abusers’ names.

The man‚ identifying himself as “Angus”‚ the “youngest brother” of Shukri‚ said: “I'd like to state clearly upfront that any physical and sexual abuse is unforgiveable and leaves scars that last a lifetime. In some cases‚ victims of abuse never recover; perhaps this is why reading Shukri's scornful statement against … Tutu and the Anglican Church of Southern Africa is so painful to me.

“As Ishtiyaq's youngest brother‚ I can unfortunately confirm that I too was a victim of abuse. What deeply saddens me is the fact that my eldest brother‚ Ishtiyaq‚ has decided to use this topic of sexual abuse … to publically lash out at an 86-year-old Desmond Tutu‚” Angus said in a written statement.

He added that Shukri accused Tutu and the church of covering up abuse “that was never reported” – while defending Oxfam and “failing to acknowledge that the 'sex parties' prostitutes and bullying of lower-income earners at Oxfam was also covered up”.

“Ishtiyaq's statement was hurtful to me‚ because I have seen first-hand the good work Tutu and the Anglican Church of South Africa has done. Reading his public announcement‚ I am also reminded about the fact that when I tried to speak out‚ my family reprimanded me and accused me of lying. I had nobody to support my story‚ nobody to confirm my allegations because the victims of abuse that came before me stood silent.

“Bad things happen when good people do nothing‚” he wrote.

“Ishtiyaq is more than a decade older than me. Yet‚ his 40-year silence resulted in countless victims falling prey to these vile individuals. Unfortunately‚ Ishtiyaq's sudden revelation offers no comfort or justice to the victims of sexual abuse but only serves to taint the reputation of a great man‚ Desmond Tutu.

“I am convinced that if Ishtiyaq said something earlier Tutu would have listened.

“Perhaps speaking about the ordeal and uttering the abusers’ names is too painful. But publically slating the church in which his family was raised and many of us still worship is in itself a painful situation for all of us to deal with. Without warning‚ this revelation of abuse is thrust onto us in the most callous way‚” he said.

“I encourage all the victims of abuse in every institution‚ not only the Anglican Church‚ to make themselves heard. Don't allow this hatred to grow inside you. Have the courage to speak out‚ find someone you trust and let them know what is happening. Most importantly‚ use the right channels like the police or your church to bring your abusers to justice.

“This is why I would like to challenge Ishtiyaq to stand up and do the right thing. Release the names of the priests that have caused this wrong against you. Face them head on and give the church‚ that you so clearly despise‚ the opportunity to right the awful wrongs you have had to live with for four decades. If you fail to do this‚ your continued silence will be an injustice to all who have suffered under their hands.”