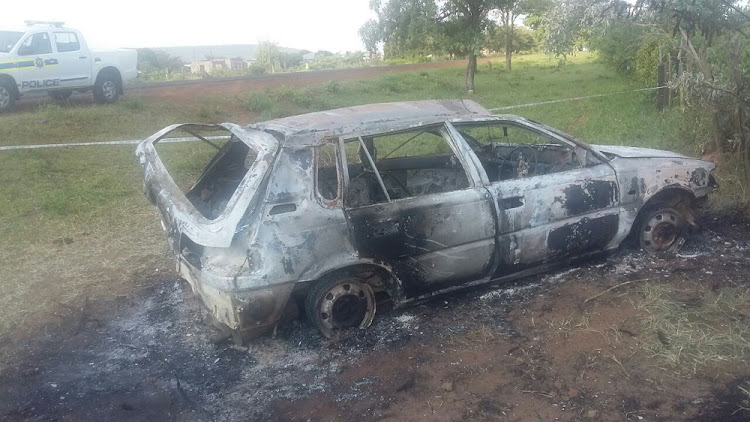 A man and a woman were kidnapped and shot before being burnt inside the boot of a Toyota Tazz near Matiyani village along the Punda Maria road outside Malamulele on Monday afternoon. Image: SAPS

Limpopo police were on Monday investigating the brutal murder of a couple whose corpses were found burnt in their Toyota Tazz vehicle.

Lieutenant-Colonel Moatshe Ngoepe said the couple was kidnapped by unknown suspects while driving near Makonde village outside Thohoyandou in Limpopo.

"The murderers loaded them inside the boot of their vehicle and drove away to a secluded area near Matiyani village along the Punda Malia road. They were fatally shot‚ set alight inside the vehicle and burnt beyond recognition‚" Ngoepe said.

Police however found a third body in the vicinity.

"The body of an unknown man with multiple gun shot wounds was also discovered some metres away from this scene‚" said Ngoepe.

"The motive behind this incident is still unknown but police investigations will reveal and consequently result in the apprehension of these murderers as they are still unfolding‚" he added.

Parliament’s Portfolio Committee on Police has condemned the participation of senior police officers in criminal activities and says the fight ...
News
3 years ago

Three people arrested in raid by City of Joburg

Three people were arrested on Wednesday for illegal electricity connections as part of the City of Johannesburg’s anti-crime initiative Operation ...
News
3 years ago

Cops must start dealing with crime

It is shocking to read about community members taking the law into their own hands, as if the police don't exist.
Opinion
3 years ago
Next Article