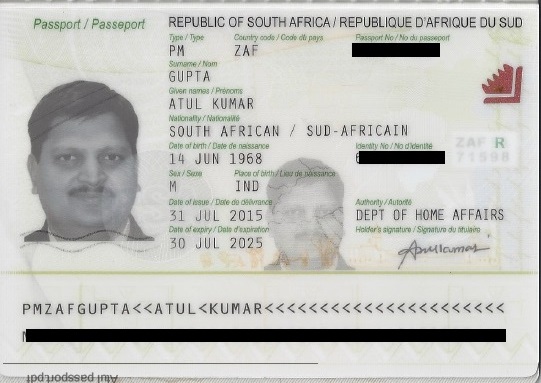 It is possible that Atul Gupta was granted South African citizenship; this is according to Home Affairs spokesperson Mayihlome Tshwete.

However, Tshwete has said, such would not have been granted by the current minister Malusi Gigaba.

Gigaba on Tuesday said that both Ajay and Atul Gupta are not citizens of the country even though a copy of Atul's South African passport was leaked in the famous #GuptaLeaks.

"In so far as we at home affairs are concerned, the two gentlemen (Atul and Ajay) are not South African citizens," Gigaba told journalists in Cape Town.

Tshwete has now backtracked and has told SowetanLIVE that it is possible that Atul Gupta was granted citizenship.

“It is possible that Atul has a citizenship but it was not through the minister,” he said.

“There’s nothing wrong with him (Atul) being a citizen. Remember, Atul was not accused of doing anything wrong (during the application process).”

Asked if the minister was not certain about Atul Gupta’s citizenship, Tshwete said the department was not allowed to share such information.

When the issue of public interest was raised, Tshwete asked “where do you draw the line?”

“The law does not permit you to share private information of people but we are considering overriding that process,” he said adding that they are now considering briefing the public about the entire Gupta family.

Recently re-appointed minister of home affairs Malusi Gigaba on Tuesday said that Atul Gupta was not a South African citizen.
News
3 years ago

The DA is demanding answers following claims by home affairs minister Malusi Gigaba that the Guptas are not South African citizens.
News
3 years ago

A warrant of arrest was issued for Atul and Rajesh Gupta.
News
3 years ago
Next Article