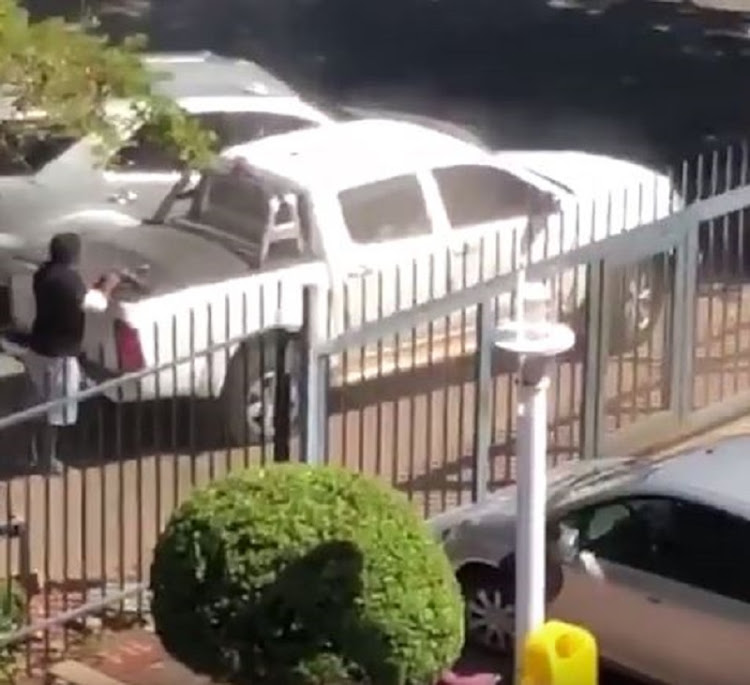 The shooting took place between security officers and armed robbers‚ one of whom died on the scene.

What started out as an ordinary day became a day of horror when she and her colleagues started hearing gunshots outside their workplace.

The woman asked not to be named for safety considerations.

She said that after the incident she couldn't stop shaking‚ "my heart was beating uncontrollably".

"I was so angry at these criminals. How (can) they put everyone’s lives in danger (like that). The image of the blood just sticks in my head and seeing the picture of him later on‚ slumped outside the car. I just thought what a waste. All for nothing‚" she said.

She and her colleagues were subjected to the gruesome image that's reminiscent of a dramatic action movie.

"Everyone was just going about their day. So as I was working I hear a sound of a car crash. I looked outside from my desk onto the road. Then a woman was running across the road.

Emergency service staff and law enforcement officers responded to the scene at around 10am on Tuesday.
News
3 years ago

"The next thing - I just started seeing a guy shooting behind a white van; another car had crashed into it‚ the one on the right (in the video)‚" she said.

The men left their vehicles on the scene and in an attempt to flee the scene they tried to hijack a woman's car. The police later said that the woman's vehicle was recovered and that she was not harmed.

Just in the nick of time‚ "I saw a whole lot of blood on the (vehicle) door as he was trying to get in. He fell to the ground and that is all I saw‚" the witness said.

They all moved away from the windows and "we continued to hear shots for a couple of minutes thereafter".

While all of this was taking place‚ all she could think of was how unpredictable life is. "Some of us are at work‚ others are in a bloody shootout. What a contradiction‚" she said.

In order to avoid the bloody memory of the incident‚ she said she had to change her route to work this morning.

"I just realised that crime is out of control in this country. I'm a victim of crime. I’m so angry because I feel helpless at every occasion. This country has gone out of control and crime prevention should be high up there with health and education‚" the distraught womansaid.

A shootout took place on the corner of Republic and Oak roads in Johannesburg on Tuesday March 6 2018. One suspect was shot dead and another arrested.