Ndebele's Makhosonke II says the land must be returned to kings 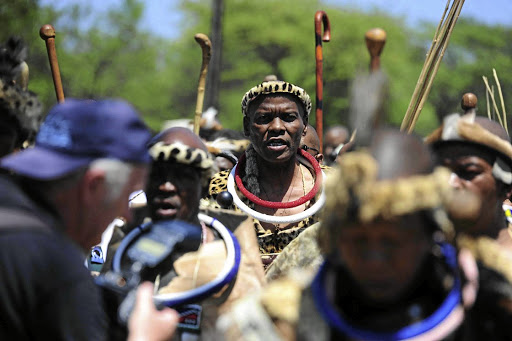 Ndebele King Makhosonke II has again claimed Chief Tshwane, after whom the Tshwane metropolitan municipality is named, has nothing to do with Ndebele people.

King Makhosonke II, born Enoch Mabena, told thousands of Ndebele people during the 38th annual commemoration of Ndebele King Silamba at Komjekejeke Heritage Site in Walmansthal, outside Pretoria, on Saturday that they were not related to Chief Tshwane. The king said he wanted nothing to do with the chief whose R900-million bronzed statue stands 6.2m high at the entrance of Pretoria City Hall. King Makhosonke II said he was not against the municipality honouring Chief Tshwane but that it must not involve Ndebele people.

"They have renamed Pretoria after Tshwane. We are not related to Tshwane and they must never begin and say he is related to amaNdebele. If they elevate him, they can do so but they must not involve us," the king said. Tshwane mayoral spokesman Samkelo Mgobozi said he could not comment as the renaming was overseen by the ANC administration.

According to SA History, Chief Tshwane was one of the sons of Chief Mushi or Musi from KwaZulu-Natal. Chief Mushi moved to the region in about 1652 and gave an area near the Apies River to his son. The name of the area possibly comes from the word "tshwana", which means "we are the same". There is hardly any information available about Chief Tshwane.

It could also be that the word Tshwane hints at a river that flows under hills of thick black forests that used to cover the area where Pretoria stands today.

According to South African History Online, Ndebele people originally settled in the area of Pretoria in the mid-1500s. King Makhosonke II said he supported the expropriation of land without compensation. He said they have claimed the land from Pretoria to Walmansthal, Vereeniging and Hammanskraal in Gauteng and Roosenekal, Zebediela and Mokopane in Limpopo. "The land must be returned to the kings," he said.

Deputy Minister of Arts and Culture Maggie Sotyu, said her department has conducted research for the past 28 years with regards to land that belongs to traditional leaders.

"The findings of the report will be outlined in our budget vote speech in parliament," Sotyu said.