What started as a joke for Stanley Kanenungo has resulted in him having to field dozens of phone calls.

Kanenungo advertised a coffin on the PE Second-hand Goods Facebook page and little did he know that his joke would turn into genuine enquiries from interested buyers.

“Still in Good condition only been used by One owner. Been under for just a year I have decided to go a different direction dead serious buyers only no time wasters‚” the advert reads on Facebook. 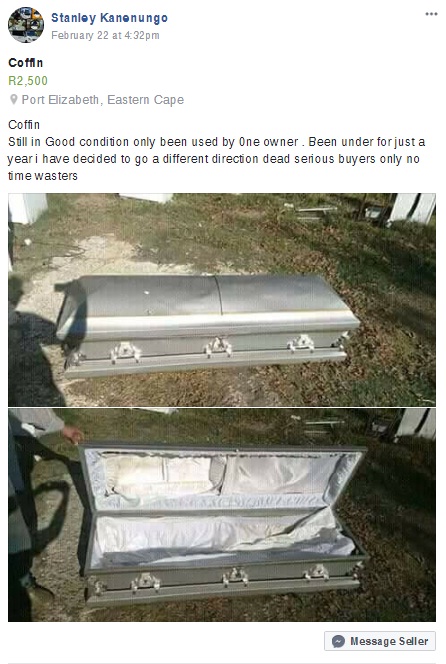 Since he posted it on Thursday‚ he has received over 100 messages daily from potential buyers.

“There were people who were serious about it. And others who knew that it was a joke. I received a lot of queries from people who wanted to buy the coffin. People were asking what happened to the first person that was in the coffin‚” said Kanenungo‚ who is shocked at the level of attention the post has received.

The R2‚500 coffin gained the attention of many as the advert has been shared more than 2‚000 times on Facebook.

Kanenungo told people he had “upgraded” the coffin and the original inhabitant was long gone.

“I am a very funny person. I love laughing and I enjoy making people laugh‚” he said. “Sometimes people can be so serious‚ and I wanted to add some comedy in their lives.”

Doom prophet will pay a fine - in monthly installments

Limpopo prophet Lethebo Rabalago‚ who spraying Doom insect killer into people's faces has been sentenced to an effective fine of R21‚000.
News
3 years ago
Next Article