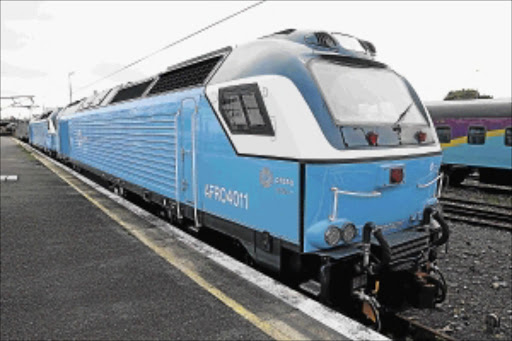 One of the new Prasa diesel locomotives.
Image: MARK ANDREWS

The cost to reinstate the 700 workers who were fired by the Passenger Rail of South Africa (Prasa) after a protected strike five years ago will amount to over R1-billion.

Two weeks ago‚ the Constitutional Court dismissed an appeal by Prasa which had sought to appeal against a Labour Appeal Court judgment last year ordering the reinstatement of the workers.

The workers‚ belonging to the National Transport Movement‚ were dismissed after Prasa accused them of burning trains worth about R42m during the strike.

Prasa had sent workers notices asking them to make representations why they should not be fired for a number of incidents at stations and depots during January 2013.

Parliament’s portfolio committee on transport has called on Prasa to urgently reopen the Khayelitsha railway line.
News
4 years ago

Prasa was not satisfied with the explanations provided by the NTM and dismissed the employees.

It ordered Prasa to reinstate them retrospectively to the date of dismissal.

An appeal by Prasa to the Supreme Court of Appeal was dismissed last month.

Prasa said it would fully comply with the judgment to reinstate all the workers.

“PRASA has‚ as a result started planning for the reinstatement of the employees along with the re-training for train drivers in order to renew their train driver licences which must be renewed every six months.”

Prasa said all employees would be re-instated with full pay as of the day the judgement was made and all would receive their lump sum back pay minus the statutory deductions such as unemployment insurance and pension funds.

“The collective cost to company is approximately R1-billion. PRASA will engage in dialogue with both the unions and the affected employees on the details of the reinstatements.”

NTM spokesman Ronnie Ramothina said workers were in negotiation with the employer on when to return to work.

He said workers spent just over five years waiting for the case to run its full course.

Ramothina said this period had been hard for the workers.

“Some lost everything‚ including their houses. Some had their children kicked out from schools‚” Ramothina said.

He said of the workers who were dismissed‚ 45 had died and 700 remained.