Beginning of the end for the DA-EFF relationship? 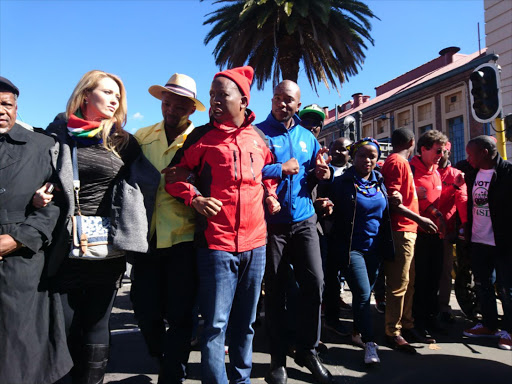 The marriage of convenience between the Economic Freedom Fighters and the Democratic Alliance in three of the country's biggest municipalities seems to be on the verge of collapse.

Forged after the local government election in August 2016‚ the two parties teamed up to remove the ANC from power in the Nelson Mandela Bay (Port Elizabeth)‚ Johannesburg and Tshwane metros. But now‚ about a year away from a national vote‚ it appears the relationship is very much on the rocks.

The sticking point? The land.

EFF commander-in-chief Julius Malema shocked Parliament on Tuesday when he indicated that the party was planning on removing one of the mayors of the three metros in which it has supported the DA.

During an EFF-sponsored motion on the expropriation of land without compensation‚ he said the party would push for a motion of no confidence in Nelson Mandela Bay mayor Athol Trollip as a "warning shot" aimed at getting the DA to show their commitment their hardline approach to land reformation.

"On April 6‚ the day of Jan van Riebeecks' arrival‚ the day of the formation of the PAC [Pan Africanist Congress] of Robert Sobukwe and the hanging of Solomon Mahlangu…in honour of these people and also as a demonstration of the seriousness about this issue of land‚ we will be passing a motion of no confidence in the mayor as a warning shot to the DA‚" said Malema.

At the end of the debate‚ the vote went overwhelmingly in the EFF's favour. However‚ the DA's members in the National Assembly were among the 83 people who voted against the motion.

In the wake of the vote‚ MP Floyd Shivambu tweeted: " We‚ the leadership of the the EFF‚ have officially instructed the leadership of the EFF in the EC to start process of tabling a motion of no confidence against DA Mayor in Nelson Mandela Bay‚ & publicly state that if the ANC presents a credible candidate‚ we will vote with them!"

Last week‚ DA leader Mmusi Maimane said expropriation of land without compensation is incompatible with a growing economy during the state of the nation debate.

The relationship between the EFF and the DA has not been an easy one to manage as the policies of the two parties are miles apart. The EFF chose to support DA mayoral candidates after the 2016 local government elections.

But this latest development threatens to rip the alliance apart at the seams.