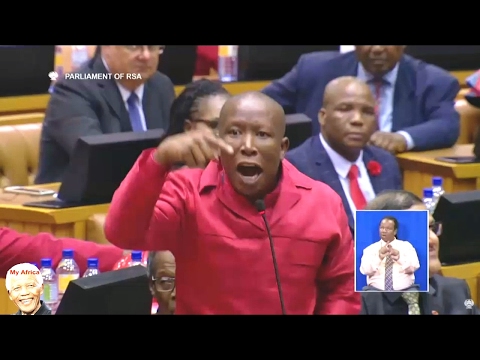 The Economic Freedom Fighters have tabled their motion on land expropriation without compensation‚ calling on the ANC to change the Constitution to make it happen.

“All of us must come together and say‚ ‘Enough is enough‚ our people must get the land’. We have offered the ANC our 6% to amend the Constitution and that 6% still stands to the African National Congress‚” said Malema during a motion he sponsored in the National Assembly on Tuesday.

The EFF won 6% of the vote in the last national election‚ and carried this representation into parliament. The EFF believe this‚ combined with the ANC’s 62% and support from other parties‚ would be enough to breach the two-thirds threshold required for a Constitutional amendment.

“We want to say to the ANC [that] it is now an opportune moment since you have agreed in your conference to amend the Constitution. Anyone who says we can expropriate land without compensation without amending the constitution‚ that person is misleading us‚” said Malema.

The draft resolution‚ brought by Malema‚ states that the country has a unique history of “brutal dispossession of land from black people by the settler colonial white minority”‚ a situation which has continued until today. It is a scenario which has left “indelible mark on [the] social‚ political and economic landscape of the country‚ and has helped create a society based on exploitation of black people and sustenance of white domination”.

Section 25 is the so-called property clause which‚ in its current form‚ requires the state to pay compensation for land redistribution.

Malema said the country needed to move to fast-tracking the return land to its rightful owners.

“The time for reconciliation is over; now is the time for justice. The grandchildren of Jan van Riebeeck have not understood that we need our land. But over and above‚ it is about our dignity. We do not seek revenge… all that our people ever wanted is their land to which their dignity is rooted and founded‚” said Malema.

“For a lasting peace‚ security and justice‚ land must be expropriated without compensation for equal redistribution. We would have failed these who came before us if we were to pay anyone for having a genocide. We cannot thank them for having killed innocent people who were fight to protect their own land‚” added Malema.

The red berets leader said that those against expropriating land are just as guilty of crime.
The National Assembly will decide whether to proceed with a process to amend the Constitution to make expropriation of land without compensation possible.

The EFF proposes that an ad hoc committee be established to review and amend Section 25 to make it possible for the state to expropriate land in the public interest‚ without compensation.

“Almost 400 years ago‚ the criminal by the name of Jan van Riebeeck arrived in our native land and declared an already occupied land as a no man’s land...declaring it a full blown genocide‚” Malema concluded.

Leader of the EFF Julius Malema tabled a motion on expropriation of land without compensation in the National Assembly on Tuesday, February 27 2018. Malema said that those who do not agree to expr...