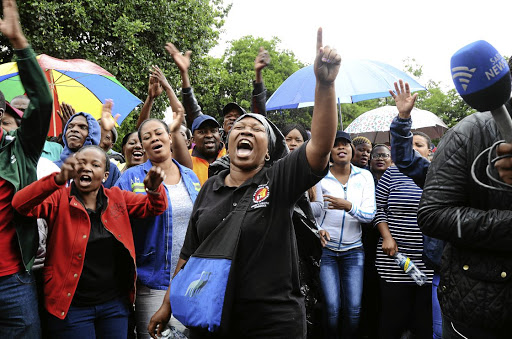 Workers of Optimum Coal mine at Hendrina near Middelburg in Mpumalanga protest amid uncertainties about the future of the mine and nonpayment of their salaries.
Image: MDUDUZI NDZINGI

The Gupta-owned mines in Mpumalanga have put the blame on Eskom, Transnet and South African banks for their struggle to honour payments to more than 2000 mineworkers.

The management of Optimum Coal, owned by the controversial family, broke its silence for the first time  yesterday when CEO George van der Merwe addressed hundreds of workers at Optimum mine in Hendrina near Middelburg.

Also yesterday, the management of Koornfontein Mines met with lawyers of Kusile Mining, a company responsible for ventilation services underground, to avert a legal battle over an R18-million debt.

Kusile Mining has stopped rendering services at the two mines because of outstanding payment.

Eskom said it’s capability to generate power from its Hendrina power station will not be affected despite Optimum’s shutdown failure.
News
3 years ago

Another company responsible for coal screening and crushing has also withdrawn its services over nonpayment.

About 500 mineworkers gathered at the entrance of Optimum Coal offices in Hendrina yesterday to demand answers from management about their salaries. However, Van der Merwe said he could not guarantee that workers would be paid today.

"I cannot commit to you, I don't have a 100% answer ... the team is busy in discussions with the banks to ensure that money is released," he said.

He confirmed reports that the company had been sold to a Swiss company, and said that deposit has already been paid.

Van der Merwe said the failure to have a bank account with South African banks since July 2017 was one of their major problems and among the reasons they were not able to pay service providers.

The company now banks with India's Bank of Baroda, which had earlier this month put in a notice with the SA
Reserve Bank that it would be shutting down its operations in South Africa.

SABS is investigating allegations that its processes were abused in order to approve coal from Gupta-owned mines.
News
3 years ago

Van der Merwe said the company can no longer export coal as Transnet was among "external forces" which have turned on them.

"I can't export coal anymore as Transnet has refused to send us trains for exports ... I owe no money to Transnet but they're not sending us any trains," he said.

Van der Merwe also said power utility Eskom had "severely victimised" them by deducting penalties imposed on the mine for the shortage of coal it supplied, which impacted on the company's cash flow.

Workers yesterday said they would protest until their salaries were paid.

"Van der Merwe runs this mine but he doesn't know if we're going to be paid or not, what's that?

"How about the debit orders that are supposed to go off tomorrow?" asked an angry
employee.