Teen battling to cope after rape, robbery by taximen 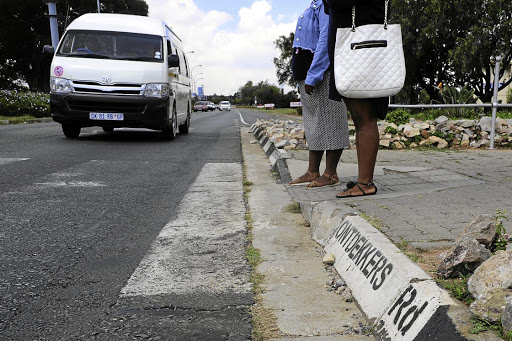 The simple, everyday activity of taking a taxi ride has become a dangerous activity for women after numerous cases of rape were reported across Gauteng townships in recent years.
Image: Thulani Mbele

An 18-year-old woman who says she was raped by a taxi driver and an accomplice after boarding a taxi in Benoni, Ekurhuleni, is battling to cope with the trauma.

The victim , who is receiving counselling, was at first hesitant to speak to Sowetan about her ordeal.

"I am still hurt and receiving trauma counselling. I have been asking myself why has this happened to me and what did I do to deserve this," she said.

The incident took place in Etwatwa, a township near to Daveyton, on Monday night.

She said during the trip from Benoni, the driver continually asked her about her destination as he dropped off other passengers along the route.

Police spokesman Lieutenant-Colonel Mack Mngomezulu said the perpetrators also robbed her of her valuables. The two men who are now being sought by police allegedly drove with the victim into the bush where they threatened her with a screwdriver.

"The driver said he needed to pick up a group of staff, but instead picked up his accomplice," Mngomezulu said.

"When they were done the passenger asked the driver to take her to Vosloorus but he refused. He searched her and took her cellphone, R20 cash, a bank card [and demanded a pin] and threw her bag out the window before leaving her stranded in the veld."

The attack on the woman comes a year after a series of similar attacks on women across Gauteng.

Gwen Ramokgopa says she is outraged at the allegations of sexual assault at the Dr Yusuf Dadoo Hospital.
News
4 years ago

Community safety MEC Sizakele Nkosi-Malobane said the latest incident was not only shocking but also disappointing after preventative strategies were discussed with taxi associations.

"We thought taxi associations would be aggressively involved but we are still getting widespread reports about taxi drivers taking advantage of women," Nkosi-Malobane said.

She said the department would be changing its strategy in order to eradicate crimes against women.

The Benoni Taxi Association said it was not aware of the incident but said it was regrettable it happened on their route.

The association's general secretary Godfrey Mathebula said intervention plans were to be implemented to prevent this kind of attacks.