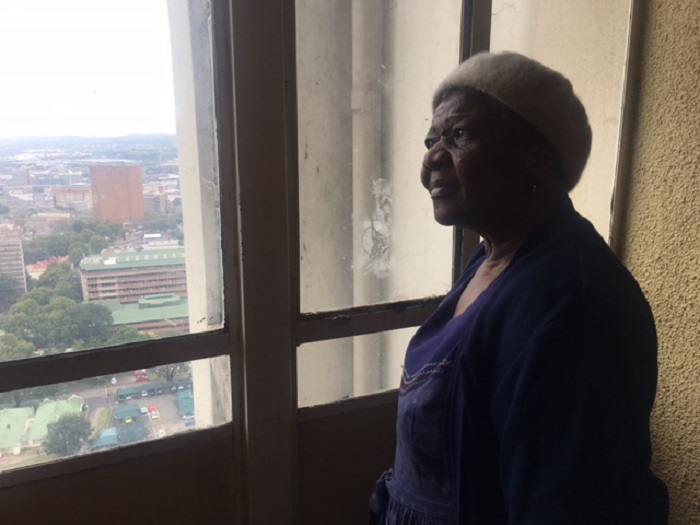 Blind and frail‚ 76-year-old Ida Sebathi has on several occasions defaulted on her high blood pressure treatment because of difficulty accessing her 17th floor apartment at Tygerberg building in Berea‚ Johannesburg.

The building’s three lifts are not working: the only lift that operates occasionally is a goods lift which is used to carry rubbish.

The 221-unit building is one of the buildings the City of Johannesburg is investigating after allegations emerged that its administrator is allegedly running a syndicate that is scamming property owners with fake bills and debts so that they can take over their units. The building is a sectional title property.

Allegedly at the centre of the scam is Tygerberg Building administrator Jan van den Bos who is alleged to have been duping property owners of the units for years. Van den Bos has however denied the allegations.

The group which is allegedly in cahoots with some municipal officials‚ allegedly rigs prepaid electricity and water meters and issues the owners with inconsistent bills and levies.

“My life is at risk‚ because I cannot even send someone to collect my medication for me because nurses have to conduct tests on me before prescribing more medication‚” the elderly Sebathi said.

She said that when she started living in the building 15 years-ago it was in good condition until Van den Bos was appointed as an administrator in 2011. “I literally have to rent my own property now. I do not know how he calculates these figures because I cannot see‚” she said.

When the publication visited the building on Thursday‚ the Red Ants were seen towing away cars from the building’s parking lot. A stench or urine and rubbish lingers in the corridors; there are no fire extinguishers and most of the corridor windows were broken. The City’s Group Forensic and Investigative Service (GFIS) has now instituted an investigation probing the allegations leveled against him.

“He installed prepaid meters in the building that are rigged to consume electricity at a faster rate. As a result most owners are now paying electricity and water directly to the City of Joburg. Van den Bos has been our building administrator since 2011‚” one of the owners said.

Another owner claimed the administrator was “stealing peoples' flats” by manufacturing bills for them. Nonhlanhla Radebe told TimesLIVE that when her parents challenged him ‚ he sent the Red Ants to her parents' unit to confiscate some of their furniture in 2016.

Denouncing it as fake‚ the Minister warned the public to be vigilant against this type of cyber-criminal activity.
News
4 years ago

She said that since 2017‚ her parents have been paying R3‚500 over and above the levies from their pension money and the Sassa grants.

“When they confiscated our property‚ they said we were owing R56‚000 and then some days later their lawyer said that we were owing R99‚000. It doesn't make sense‚” she added.

Another victim‚ Idahnombeko Monoabile‚ said that in 2015 she was arrested and spent 9 days at Sun City Prison after she challenged Van den Bos.

“I was served with papers that I missed a court appearance that I was not even aware of‚” she said adding that she is now suing Van den Bos‚ the Department of Correctional Services and police.

The property owners have since filed an urgent application with the Gauteng High Court seeking to interdict Van den Bos from the building as his contract as the administrator has lapsed.

I admit that the building was in a good condition‚ but that was many years ago. When we took over it was already in a bad condition. How are we going to fix the building if the owners owe so much money?

In the documents the owners seek an interdict restraining Van den Bos from sending out levy statements‚ collecting levies‚ doing book-keeping and maintenance of the building.

City of Joburg mayor Herman Mashaba’s spokesman‚ Siyanda Makhubo‚ confirmed that the city was still in the preliminary stages of the investigation. “We are currently investigating about six buildings where Mr Jan Van den Bos is an administrator‚” he said.

Makhubo said that the city had instituted the probe to get to the “bottom” of the allegations.

“The majority of the buildings were reported as hijacked. There is about 8 Buildings reported to GFIS in CoJ‚” he added.

Replying to the allegations put to him‚ Van den Bos said that the owners of the units actually owed the body corporate R4-million.

"I admit that the building was in a good condition‚ but that was many years ago. When we took over it was already in a bad condition. How are we going to fix the building if the owners owe so much money? There are 228 owners in the building and the majority support me‚ it's just a few that are complaining and it's the ones that are not paying. The people that pay hardly complain‚" he said.

Don't bank your baby's stem cells‚ it's a money-making scam

Health experts have warned that storing a baby's stem cells is largely a “scam”.
Good Life
4 years ago

The SANDF on Friday warned that a syndicate is posing as an SANDF recruitment agency in the Western and Eastern Cape.
News
4 years ago

Couple among those nabbed for fake roadworthy certificate scam

The other two‚ who were not at work during the raid‚ handed themselves over to police on Thursday.
News
4 years ago
Next Article