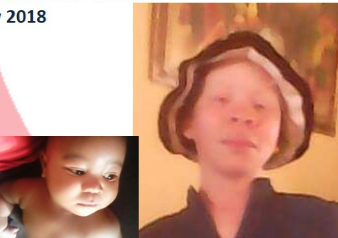 Two bodies believed to be those of a little albino girl and her one-year-old nephew who were snatched from their home in Hlalanikahle‚ Witbank‚ last month were found on Wednesday.

Brigadier Leonard Hlathi said one of the corpses was found in Cullinan while the other was found in a swamp on the N4 en route to Pretoria.

"The bodies were in a bad state‚" Hlathi said.

"A postmortem needs to be conducted to determine the cause of death and DNA tests to also confirm it is them‚" he said.

Gabisile Shabani‚ 13‚ and her 15-month-old nephew‚ Nkosikhona Ngwenya‚ were kidnapped last month by armed gunmen who broke into their house in the middle of the night.

Relatives said they believed Gabisile had been taken because she was an albino. They also told TimesLIVE they believed Nkosikhona had been mistaken for another toddler who was in the house at the time who also lived with albinism.

Hlathi said one suspect had since been arrested.

"He will be appearing in the Witbank Magistrate's Court today‚" Hlathi said.

A 13-year-old girl who was snatched from her bed in Hlalanikahle‚ Witbank‚ two days ago may have been the victim of a calculated‚ well planned ...
News
4 years ago

The four men who were arrested in connection with the alleged attempted murder and kidnapping of Mzwandile Ntuli have been released from custody.
News
4 years ago
Next Article