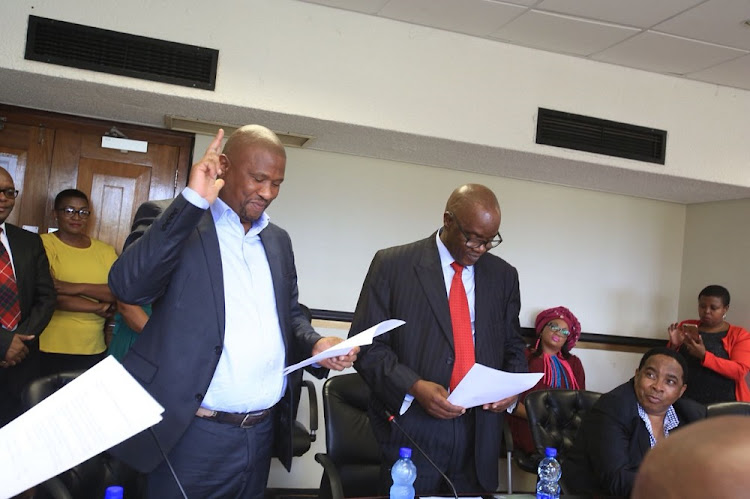 ANC provincial chairman Oscar Mabuyane and his deputy Mlungisi Mvoko were sworn in as members of the Bhisho legislature this morning.
Image: SINO MAJANGAZA

ANC Eastern Cape provincial chairman Oscar Mabuyane and his deputy Mlungisi Mvoko are the newest members of the provincial legislature in Bhisho following their swearing-in on Monday morning.

Mabuyane said they were ready to bring energy to the ANC caucus and the legislature “to transform the lives of our people”.

He however refused to be drawn into speculation that the move was in preparation of a cabinet reshuffle in the provincial government ahead of the state of the province address on Friday.

This as the ANC provincial deployment committee is also meeting at Calata House on Monday after the provincial secretary spoke of “reconfiguration” of the provincial executive weeks ago.

“Here now I’m not the spokesperson nor representative of the ANC. If there are issues that are not clear I advise you [to] follow up with the provincial secretary of the ANC‚ Lulama Ngcukayitobi‚” said Mabuyane‚ playing down speculation of what is believed to be an imminent reshuffle of the provincial executive.