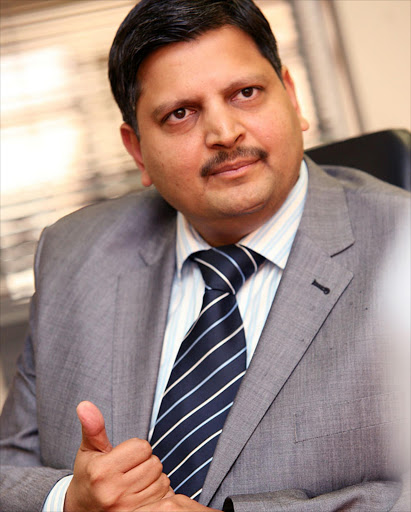 On Thursday‚ just hours after the business family's top lieutenants and nephew‚ Varun Gupta‚ appeared in the Bloemfontein Magistrate’s Court on charges of fraud and theft‚ the Hawks announced that Ajay Gupta was a fugitive from the law and that his brothers‚ Atul and Rajesh "Tony" Gupta‚ were also being sought.

Ajay Gupta went on the run shortly before Hawks officers raided his family compound in Saxonwold‚ Johannesburg on Wednesday. It was during the raid that officers arrested several of the family's allies.

The project‚ which Hawks officers allege was the brainchild of Mining Minister Mosobenzi Zwane‚ who was the then Free State MEC for Agriculture‚ was meant to uplift indigent people living in the Vrede and Warden areas. Instead that money was allegedly syphoned off into business bank accounts linked to the Guptas.

Private forensic investigator Paul O'Sullivan‚ on Thursday offered a R200‚000 reward for Ajay Gupta's arrest after the Hawks revealed that he was on the run.

On Saturday‚ Wierzycka took to Twitter to announce that she would match the reward "Rand for Rand".

"So now we have R1-million in the pool. South Africans‚ contribute your spy skills. We need these crooks in jail where they belong. As soon as possible."

Ajay Gupta‚ the patriarch of the embattled Gupta family‚ is “on the run” and surrounded by a team of heavily armed bodyguards.
News
3 years ago

Hawks have issued a warrant for Atul Gupta, thought to have evaded them in yesterday's raids.
News
3 years ago

The Hawks are at the Gupta compound in Saxonwold on Wednesday morning.
News
3 years ago

The Hawks have confirmed that three people have been arrested following operations at the Gupta family's Saxonwold residence.
News
3 years ago

Inside the hunt for Atul Gupta

The Hawks have issued a warrant of arrest for Atul Gupta‚ senior officials in the security cluster told Times Select in the wake of raids on Gupta ...
News
3 years ago

State capture number one suspect Ajay Gupta has been hopping from one house to another.
News
3 years ago
Next Article