Yes‚ I do want to thank Zuma‚ says Ramaphosa amid boos 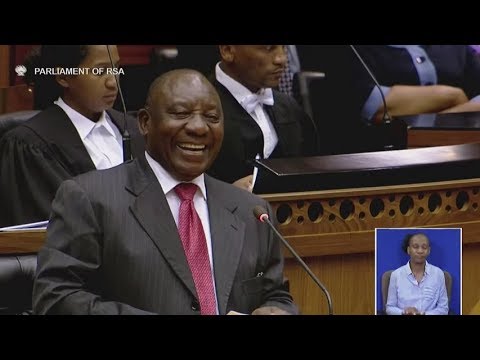 President Cyril Ramaphosa began his maiden state of the nation address (Sona) Friday evening by recognising his predecessor Jacob Zuma - a man he succeeded just over 24 hours ago - amid boos from MPs and guests.

“Yes‚ I do wish to thank former president Jacob Zuma for the manner in which he approached this very difficult and sensitive process‚” he said.

Zuma resigned on Wednesday evening and Ramaphosa was sworn in as the fifth democratically elected president on Thursday.

Ramaphosa said he wanted to thank Zuma for his service to the nation during his two terms as president.

“I spoke to president Zuma yesterday … and we exchanged wonderful pleasantries and he wished us well for the holding of this Sona‚” he said.

Zuma did not attend the Sona but former presidents Thabo Mbeki and FW de Klerk were there.

Newly-elected President Cyril Ramaphosa delivered the state of the nation address on February 16 2018.