The woman who blew the whistle on state capture: 'I am joyful things are turning around' 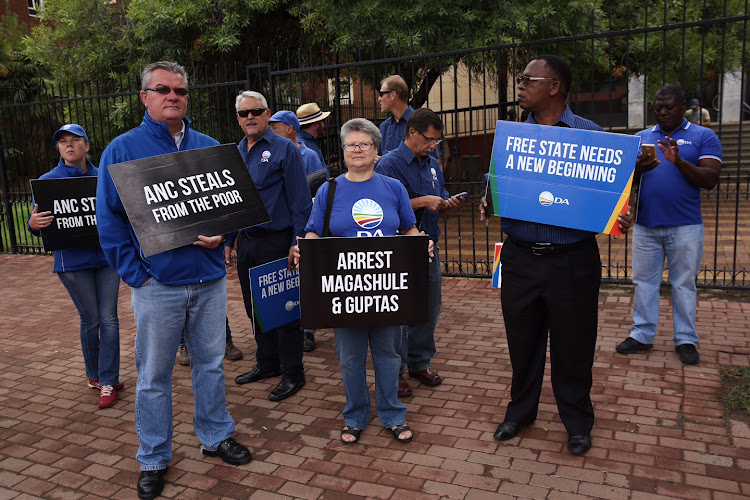 Protestors outside the the Bloemfontein Regional Court. Five people arrested during Hawks raids on various Gupta compounds appeared. The suspects were arrested in connection with investigations into the Free State Vrede dairy farm project.Image: ALON SKUY

One of the women who raised the alarm on state capture believes it was the Christian thing to do.

“I did what I did because it was the right thing to do. I knew it was my responsibility as a human being‚ a mother‚ a citizen of the country and a Christian to stand for my values and principles‚” said Bianca Goodson.

Goodson is a former executive of Trillian Capital Partners‚ who spoke out after she noticed suspicious transactions at the financial consultancy. She was assisted by the Platform to Protect Whistleblowers in Africa (PPLAAF) to release a statement to former public protector Thuli Madonsela.

Goodson and fellow Trillian executive Mosilo Mothepu resigned in April 2016. Their testimony contributed to allegations of state capture being exposed.

Mothepu sent a statement to Madonsela‚ which featured in the October 2016 “State of Capture” report‚ which detailed allegations of how the Gupta family had allegedly exercised influence over President Jacob Zuma and other senior government officials to score lucrative state contracts.

A damning report had exposed Gupta-linked Trillian for alleged corrupt practices involving multimillion-rand payments from Eskom and Transnet. The report confirmed that Trillian boss Eric Wood had prior knowledge that former finance Nhlanhla Nene would be fired in 2015.

In November last year Mothepu and Goodson testified at parliament’s inquiry into allegations of state capture at Eskom.

Goodson said she was heartened by the dramatic events this week‚ when Gupta associates were arrested for their alleged involvement in the Vrede dairy project scandal.

State capture number one suspect Ajay Gupta has been hopping from one house to another.
News
3 years ago

“I am joyful that things are slowly turning around and that South Africa is standing up for its own values‚” Goodson said.

Eight suspects were arrested on Wednesday during operations in Bloemfontein and Johannesburg in connection with the Vrede scandal. About R220 million was allegedly stolen from the Free State project‚ which was meant to assist indigent farmers but saw millions of rand allegedly siphoned off to the Guptas.

The PPLAAF welcomed the arrests and the subsequent resignation of President Zuma‚ whose administration has been plagued by allegations of corruption.

“This day is a victory for those who fight relentlessly against corruption‚” said William Bourdon‚ chairman of the PPLAAF.

“Whistleblowers and anti-corruption activists‚ working in the light or in the shade‚ are the true heroes of this historical day. But true justice will only be achieved when those responsible are properly prosecuted.”

Ajay Gupta‚ the patriarch of the embattled Gupta family‚ is “on the run” and surrounded by a team of heavily armed bodyguards.
News
3 years ago

State capture number one suspect Ajay Gupta has been hopping from one house to another.
News
3 years ago

Hawks have issued a warrant for Atul Gupta, thought to have evaded them in yesterday's raids.
News
3 years ago

The Hawks have confirmed that three people have been arrested following operations at the Gupta family's Saxonwold residence.
News
3 years ago

Security is being heightened at the Bloemfontein Magistrate's Court as Gupta family and their business associates appear.
News
3 years ago

Inside the Gupta home – officers describe the Hawks raid

Officers have described what it is like inside the luxurious Gupta home.
News
3 years ago
Next Article