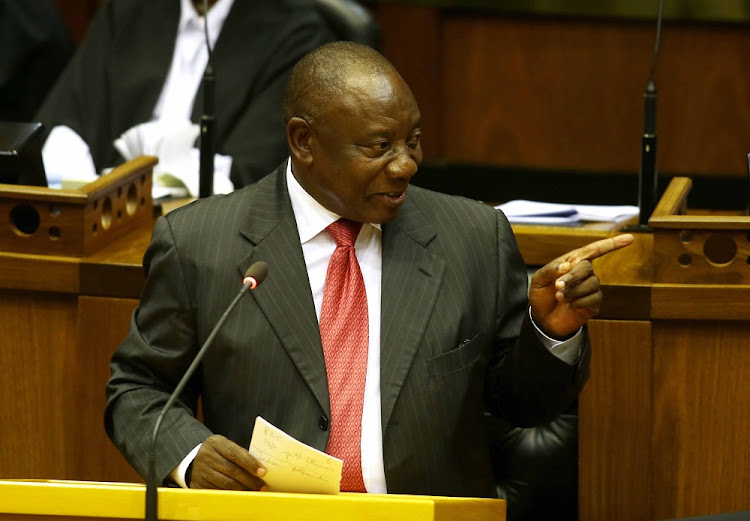 Newly elected president Cyril Ramaphosa will on Friday be greeted by all the pomp and ceremony associated with the official opening of parliament.

Ramaphosa and more than 1‚000 guests will be treated to a lavish display‚ including a military parade and a 21-gun salute‚ parliament said. But amid the pomp and ceremony‚ there will also be some poignant moments to tug at the heart strings of ordinary South Africans.

At 7pm on Friday Ramaphosa is due to deliver the State of the Nation Address in the National Assembly. Parliament said it will be a “full ceremonial” occasion.

“It will involve a ceremonial parade exhibiting military traditions‚ drills and ethos of the army‚ the navy and the air force of the Republic of South Africa. This includes a national salute by the Ceremonial Guard of the South African National Defence Force‚ a military band‚ a salute flight by the South African Air Force and a 21-gun salute‚” parliament said in a statement. “Processions on the red carpet from the Slave Lodge to the National Assembly building will reflect the three arms of the state – the Judiciary‚ the Legislature and the Executive.”

Newly-elected President Cyril Ramaphosa will on Friday deliver a State of the Nation Address that will hopefully set the country on a sustainable ...
News
3 years ago

But the event will not only be about the spectacle. It will also feature ordinary citizens‚ including a guard of honour made up of high school learners and survivors of gender-based violence‚ which generated several tragic headlines over the past year.

“The civilian participation lining the red carpet from the Slave Lodge to the saluting dais in front of the National Assembly building will be a Junior Guard of Honour of learners from secondary schools in the Western Cape Winelands‚ a Civil Guard of Honour consisting of representatives from three civil society organisations working with women and children and survivors of gender-based violence (Saartjie Baartman in Athlone‚ St Anne’s in Woodstock and Liefdesnessie in Bredasdorp) and nine Eminent Persons‚ selected by provincial legislatures in recognition of their contribution to our democracy.”

A total of 1‚120 guests have been invited to form part of the occasion‚ drawn from all sectors of society‚ including the youth‚ women‚ Chapter 9 institutions‚ the diplomatic corps‚ traditional leaders‚ the mayor of Cape Town‚ civil society‚ religious bodies‚ state-owned enterprises‚ business and trade organisations.

Ramaphosa was elected unopposed as president on Thursday afternoon in parliament and sworn in by Chief Justice Mogoeng Mogoeng later in the day.

Ahead of the State of the Nation Address, TimesLIVE spoke to school kids to find what the problems are that the country is facing and what can be done to fix them.

Sona will be delivered by Cyril Ramaphosa.
News
3 years ago

Ramaphosa carries the hopes of a nation

Newly-elected President Cyril Ramaphosa will on Friday deliver a State of the Nation Address that will hopefully set the country on a sustainable ...
News
3 years ago

“South Africa must come first in everything that we all do”.
News
3 years ago

Congratulations but also words of caution for Ramaphosa from opposition parties

Leader of the official opposition Mmusi Maimane congratulated Ramaphosa but noted that the DA would raise concerns if he did not deliver to the ...
News
3 years ago
Next Article