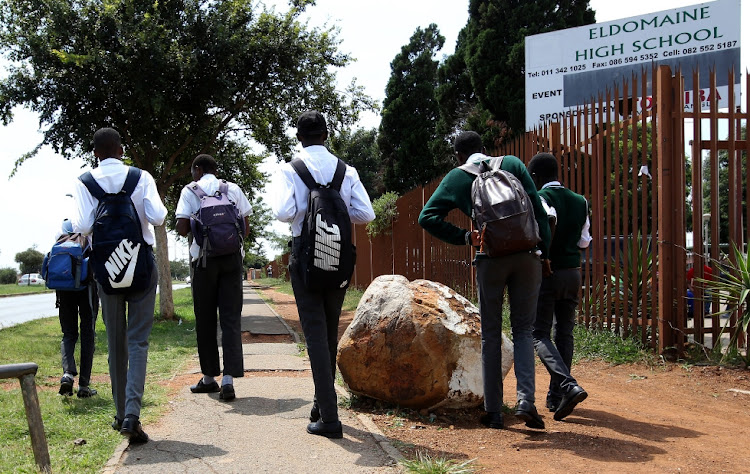 A group of Eldomaine High School pupils were kicked out of classes for wearing skinny pants and told to come back to school with their parents
Image: SANDILE NDLOVU

A school principal has shown a group of boys at his school premises who really wears the pants when he sent them home for wearing pants the school deemed too tight for the classroom.

The 12 boys from Eldomaine Secondary School in Eldorado Park were yesterday kicked out of class because their grey long pants were tailored to skinny detail from the original straight cut.

The principal asked the boys to come back with their parents. Outside the school yesterday, the group and some parents insisted there was nothing wrong with the skinny pants.

Last year, pupils at Hoërskool Pretoria-Wes disrupted teaching as they insisted to wear the skinny pants as part of the school uniform.

At Eldomaine, Kabo Ntehang, 18, said the principal’s action was unnecessary.

“I don’t see anything wrong with skinny pants as they feel comfortable and neat. Now I have missed out on my business studies class test for wanting to be presentable in class,” the Grade 12 pupil said.

“What matters is that we are wearing school greys,” he said.

Some parents also felt the school was being unfair and harsh to the pupils.

Keanen Maynard, 38, a father of two sons at the school, felt the issue of the pants was too petty to lose lessons over.

“They are sitting out in the street doing nothing... The school could have called parents before chasing them out,” Maynard said.

Another parent Eugene Bowles, 35, said: “These skinny pants do not distract teaching and learning, I don’t see the reason why they are making a big deal out of nothing.”

A school official said the school had warned the boys before which is why they were sent home to come back with their parents. “This is not a place for a fashion parade, pupils come here to study and there are rules to follow. Our uniform is simple and we don’t want kids who will come here wearing expensive pants.”

Education spokesman Steve Mabona said no school was allowed to turn back pupils and it would investigate.