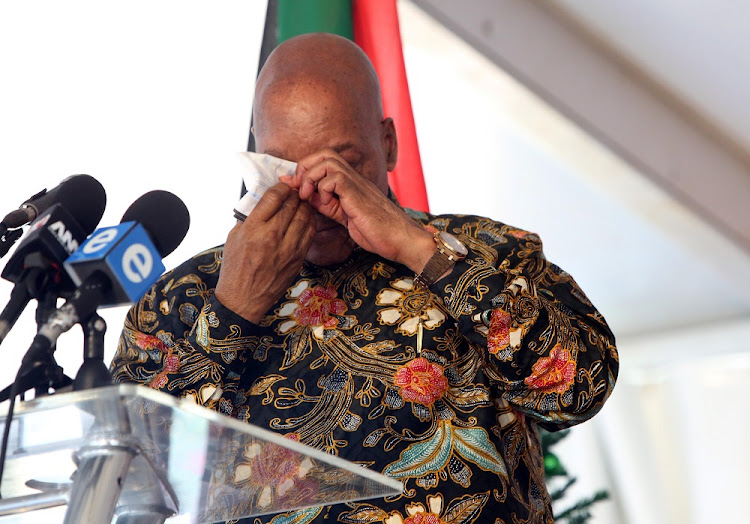 Jacob Zuma The ANC has recalled Jacob Zuma as the head of state.
Image: JACKIE CLAUSEN

“We rejoice with all South Africans today as the long‚ painful decade of Zuma’s presidency finally comes to an end‚” Maimane said in a statement.

“Even in his resignation speech tonight‚ he refused to take any responsibility for his actions‚ and for the harm he caused the country. Such shameless disdain requires a level of pathology that reveals Jacob Zuma’s true nature.

“He must now face the 783 criminal charges still awaiting him before the courts. There can be no amnesty or immunity for Jacob Zuma.”

The SA Communist Party said: “The principal victims of the state capture agenda in which President Zuma has been central has had a particularly devastating impact on the working class and the rural and urban poor.

President Jacob Zuma announced on Wednesday night that he would step down with immediate effect after the ANC's national executive committee decided ...
News
3 years ago

“In welcoming this long overdue resignation there are many lessons to be learnt. In the first place‚ this was not a willing stepping-down. Only a protracted struggle from within the ANC and its alliance has finally dislodged this President gone wrong.

Save SA‚ founded by ANC activist and businessman Sipho Pityana‚ saluted civil society and other South Africans for uniting against Zuma. “We are absolutely delighted to see the back of the worst president this country has ever seen. We look forward to seeing him again in court‚ and soon‚ to face justice for his multitude of crimes against the people of South Africa‚” Save SA said in a statement.

“Zuma’s resignation brings to an end the most calamitous era in our post-apartheid history‚ and will be celebrated by anyone who values our Constitution‚ our flag and our sovereignty.

“All these together with the values of our young democracy were compromised by Zuma and his crony compradors‚ who pillaged the South African state for close on a decade.

“Like Zuma‚ these collaborators must also be removed from public office and face justice.”

“We note Jacob Zuma’s opinion and claims of having served the country as best he was able‚ however we disagree with his views‚ as he continues believe that he has done nothing wrong‚” said Outa CEO Wayne Duvenage.

“We need not deliberate further on Jacob Zuma’s failure as a leader of this country for the past nine years. What is important now is that we get behind a new leadership that has expressed its intention to root out corruption and introduce policies and a climate that aims to attract investment and create jobs.”

President Jacob Zuma resigned as leader of South Africa on Feburary 14 2018 during a televised address to the nation.

President Jacob Zuma, who has been recalled by the African National Congress (ANC), will address the media in Pretoria on Wednesday morning.
News
3 years ago

IN FULL: Parliament on Zuma no confidence motion

National Assembly Speaker Ms Baleka Mbete has sent a letter to Economic Freedom Fighters (EFF) Leader Mr Julius Malema informing him that she has ...
News
3 years ago
Next Article