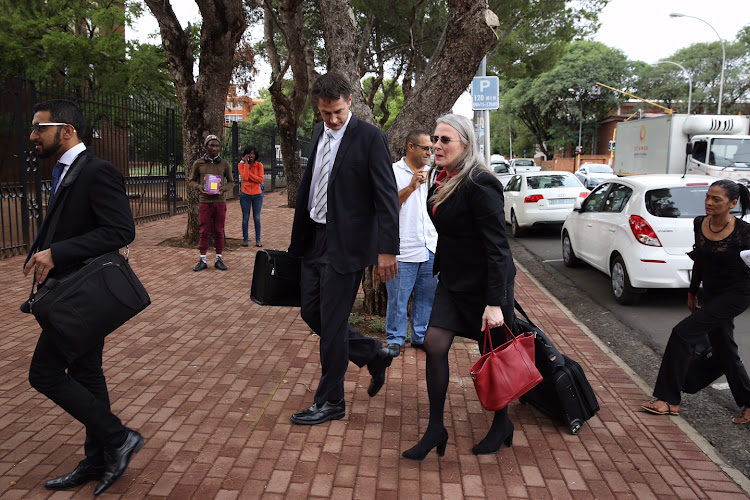 FEBRUARY 15, 2018. Lawyers arrive at the Bloemfontein Regional Court for appearance of five people who were arrested during Hawks raids on various Gupta compounds. The suspects were arrested in connection with investigations into the Free State Vrede dairy farm project.
Image: ALON SKUY

Security is being heightened at the Bloemfontein Magistrate's Court ahead of the appearance of the embattled Gupta family and their business associates.

Five people were arrested in Hawks raids in Gauteng and the Free State on Wednesday.

The raids were carried out in the Saxonwold compound of the Gupta brothers as well as at their businesses in Midrand.

Homes of their co-accused in Bedfordview and in Houghton were also raided as part of the Hawks investigation into the Estina dairy project.

The project was meant to see R220-million invested in upliftment programmes for indigent farmers in the Free State. Instead it is alleged that at least R30-million was siphoned off to the Gupta family for a lavish wedding in Sun City.

Hawks spokesman Brigadier Hangwani Mulaudzi said that the accused would be appearing in court on charges of corruption‚ money laundering and theft of state funds.

Eight associates of the controversial Gupta family appeared in the Bloemfontein Magistrate’s Court on February 15 2018.

Hawks have issued a warrant for Atul Gupta, thought to have evaded them in yesterday's raids.
News
4 years ago

Ashu Chawla and Ronica Ragovan‚ and Varun Gupta were among five people arrested in raids by the Hawks.
News
4 years ago

The Hawks on Wednesday morning raided the Gupta compound in Saxonwold as part of its investigation into state capture.
News
4 years ago

A neighbour is ecstatic at witnessing the Hawks raid on the Guptas' home on Wednesday.
News
4 years ago
Next Article