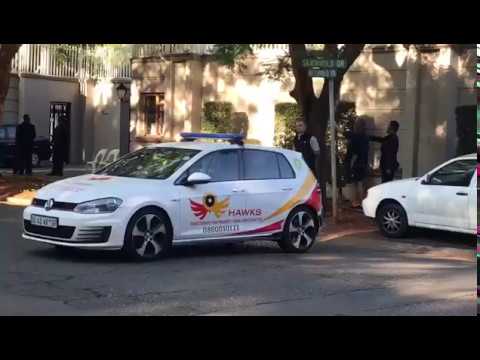 Hawks raided the Gupta compound in Saxonwold, Johannesburg on February 14 2018.

The Hawks have confirmed that three people have been arrested following operations at the Gupta family's Saxonwold residence in Johannesburg.

Hawks spokesperson Hangwani Mulaudzi would not immediately reveal the names of those arrested.

"Let's just say that it includes charges of fraud‚" he said.

It is believed that prior to raiding the Gupta residence‚ officers had raided a Bedfordview residence‚ believed to be that of a former MD of Sahara Systems.

Mulaudzi refused to comment on whether the two incidents were linked.

A statement from the Hawks said: “The Hawks’ Serious Corruption Crime Unit is currently conducting on-going operations at various addresses in Gauteng‚ including a residential premises in Saxonwold near Johannesburg.

“The operation is in respect of the Vrede Farm investigations. So far three people have been arrested and two other suspects are expected to hand themselves over to the Hawks. Operations are still ongoing and further details will be made available at a later stage.”

The Hawks on Wednesday morning raided the Gupta compound in Saxonwold as part of its investigation into state capture.
News
4 years ago

Gupta lawyer says his clients are not arrested

Ahmed Gani‚ the embattled Gupta brothers' lawyer‚ says his clients have not been arrested.
News
4 years ago

The Hawks are at the Gupta compound in Saxonwold on Wednesday morning.
News
4 years ago

Inside the Gupta home – officers describe the Hawks raid

Officers have described what it is like inside the luxurious Gupta home.
News
4 years ago

A neighbour is ecstatic at witnessing the Hawks raid on the Guptas' home on Wednesday.
News
4 years ago
Next Article