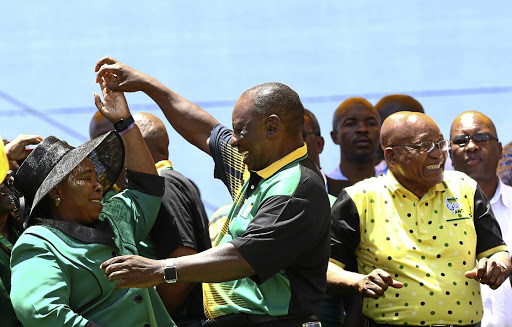 The ANC announced yesterday that it had recalled Zuma from office and wants its president, Cyril Ramaphosa, to take over the reins at the Union Buildings.

Zuma's recall in the early hours of yesterday followed a marathon 13-hour NEC meeting in which Zuma's supporters are said to have fought hard to prevent the president from being axed from office.

They wanted the party to agree to his demand that he be given three more months. Zuma wanted to attend the African Union Summit; a meeting between Brazil, Russia, India, China and South Africa (Brics) as well as hand over his chairmanship of the Southern African Development Community.

The Thabo Mbeki Foundation has welcomed what it calls the “long overdue” recall of President Jacob Zuma‚ saying it will provide the possibility for ...
News
4 years ago

But, according to ANC insiders at the meeting, Zuma's supporters were dealt a heavy blow during the debate when Dlamini-Zuma said the president should not be allowed to stay in office until the end of his term in 2019 and or be allowed to deliver the State of the Nation Address (Sona).

Dlamini-Zuma spoke just before Ramaphosa and secretary-general Ace Magashule left the gathering for their late-night meeting with Zuma where they once again asked him to resign.

At the post-NEC press conference yesterday, Magashule confirmed that Zuma wanted to stay in office for another three to six months, as Sowetan reported, and that the party would not agree to this. He said the ANC constitution gave power to the NEC to recall its deployee, and that the decision to oust Zuma is final.

Although it had not set a deadline for Zuma to resign, Magashule made it clear that they expected the president "to respond" today to the decision.

'Everything is off, he has to go' - ANC NEC gives Zuma a deadline to step down

The ANC’s NEC has decided to recall Jacob Zuma as head of state‚ with no deal and an ultimatum.
News
4 years ago

He shut the door on the possibility of Zuma addressing parliament before he goes.

"If there will be Sona, it will be addressed by comrade Ramaphosa. There is no question about it," he said.

Another source said National Assembly Speaker Baleka Mbete told the gathering Zuma informed her and National Council of Provinces chairwoman Thandi Modise that he did not want to deliver the Sona and was willing to step down this month.

However, when Ramaphosa returned to the NEC meeting after his short meeting with Zuma at the latter's residence Mahlamba Ndlopfu, he said Zuma denied having said that.

Another insider said his refusal to resign angered NEC members and they then all agreed he should be recalled.

ANC leadership confirmed on Tuesday that it has recalled President Jacob Zuma.
News
4 years ago

Chairman Gwede Mantashe is then said to have stood up and read part of the ANC constitution that says ANC leaders have the right to deploy and recall members.

Magashule yesterday added that Zuma said he wanted to persuade the NEC to take into "cognisance that the time in which we are, there are many challenges for the ANC".

"Therefore, we should find the way of resolving this matters amicably and once more pleaded for that time-frame."

Sona is expected on Monday, and the budget vote on Wednesday.

Meanwhile, Zuma has postponed today's cabinet meeting as he cannot preside over it since he has been recalled.