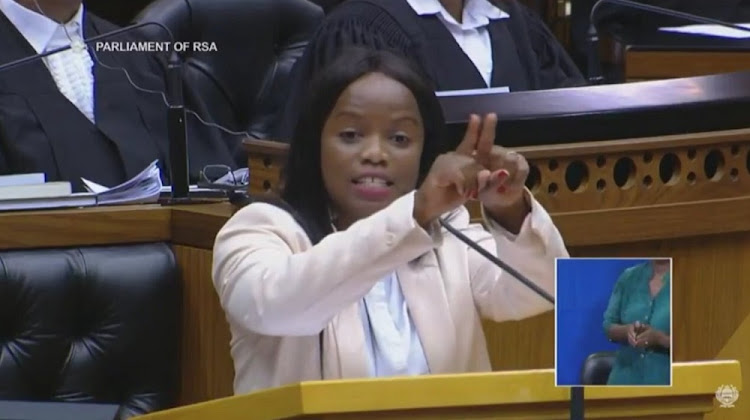 Van Damme reportedly told DA top brass of her decision two weeks ago‚ but the party has kept this under wraps due to the factional battle within the City of Cape Town where the party is trying to remove Patricia De Lille as mayor.

She is the third high-profile member to quit a public post in recent months.

Earlier this month‚ former DA Youth leader Mbali Ntuli quit her job as a member of the KwaZulu-Natal legislature to take up a position as the party’s provincial head of campaign strategy. Last year‚ Gavin Davis quit as the party’s head of policy and media.

A crowd singing Patricia de Lille’s praises gathered on the steps of the High Court in Cape Town on Tuesday as the mayor prepared for a legal ...
News
4 years ago

Coming at a time when De Lille continues to fight to save her political life in the party‚ Van Damme’s resignation is likely to fuel the perception of a sidelining of strong black women in the DA.

DA insiders with knowledge of Van Damme’s resignation said she took the decision because she didn’t get enough support in her office as a national spokesperson. Health reasons were also cited‚ a party insider said.

One of the things Van Damme was reportedly upset with – and which she voiced to party leadership - was the DA’s decision not to support the ANC-sponsored motion of no confidence in De Lille‚ choosing instead to bring its own.

“It is hypocritical. We say the same thing about the ANC in Parliament‚ about voting with a conscience‚” said the insider.

Van Damme confirmed her resignation but didn’t want to give reasons.

“The reasons I have provided I discussed with the party leadership‚ some of which are private‚” she said.

Cape Town mayor Patricia de Lille won her legal skirmish with the DA on Wednesday‚ the eve of a no-confidence vote in her leadership.
News
4 years ago

A DA insider familiar with the party’s communications structures said it was disappointing that Van Damme resigned because she was being treated as a darling of the party ahead of the other spokesperson‚ Refiloe Ntsekhe. She was assigned the high-profile issues‚ said the insider.

“She is sent to communicate on all the strategic media [issues] while Refiloe is sent to ANN7‚” the source said.

She said she did not know why Van Damme would resign given the special treatment she had received.

Another DA insider said he was aware that Van Damme had quit her post‚ but thought the matter was still being negotiated internally.

“I don’t talk all the time with Phumzile. [Recently] she has been used to communicate some ‘witch hunt decisions’ and I was a bit concerned that they were using her and considered the implications on her persona as well‚” said the party member.

The DA wrote to Cape Town mayor Patricia de Lille on Friday asking her to drop her court bid for a secret ballot in Thursday’s no-confidence vote.
News
4 years ago

He said one of those decisions was when Van Damme was asked to communicate the decision that De Lille had three days to say why she should not resign‚ only for the party to later backtrack.

“The organisation then came out and said De Lille should not be rushed. This is after Van Damme was seen on notional TV saying‚ ‘We can’t have a caucus leader like that‚ we have heard enough as a party ...we need new leadership in the party within 72 hours’‚” said the DA insider.

He said‚ similarly‚ Van Damme was asked to communicate that Western Cape Premier Helen Zille was going to face a disciplinary hearing‚ only for the party to come to a different decision.

“These decisions are going to cost her...when she was to stand [for leadership positions]‚” he added.