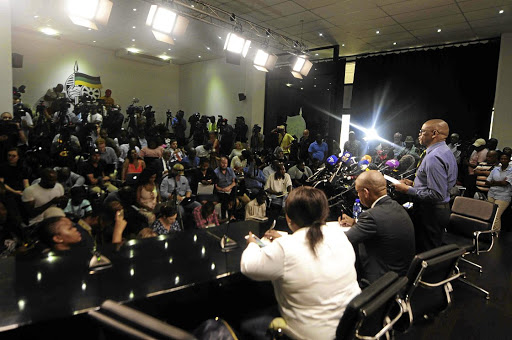 Magashule, who is one of Zuma's staunch supporters, said Zuma should be treated with respect and dignity.

Addressing a packed media briefing, Magashule said: "We are not treating President Zuma as [a] leader who is defiant and all that.

"There is no need for us to humiliate him. We respect him as one of the leaders of the ANC who have contributed immensely in the Struggle against apartheid."

"We have always rallied behind our leaders."

He also appeared not to be happy that Zuma was told by the ANC to vacate office immediately. "At [a] workplace you are given a [notice] period, but here we are in politics."

The briefing took place after the governing party's NEC - the ANC's highest decision-making body between conferences - took a decision on Monday night that Zuma should be recalled from office.

ANC leadership confirmed on Tuesday that it has recalled President Jacob Zuma.
News
4 years ago

Magashule said Zuma had agreed in principle to resign, but had proposed time-frames extending from three to six months. The NEC rejected Zuma's request and demanded that the president be recalled immediately.

"While appreciating President Zuma's proposal, the national executive committee noted that South Africa is going through a period of uncertainty and anxiety as a result of the unresolved matter of transition.

"Further, that this uncertainty and anxiety will erode the renewed hope and confidence among South Africans since the 54th conference of the ANC. Therefore, the national executive committee firmly believes that this situation requires us to act with urgency in order to steer our country towards greater levels of unity, renewal and hope.

"We are therefore determined to restore the integrity of the public, institutions, political stability and urgent economic recovery."

Magashule, however, contradicted himself when he said the ANC was expecting Zuma to respond publicly about the decision to recall him.

Earlier, he said the governing party had not given Zuma a deadline.

Magashule also stated that Ramaphosa was the party's choice to succeed Zuma as head of state.