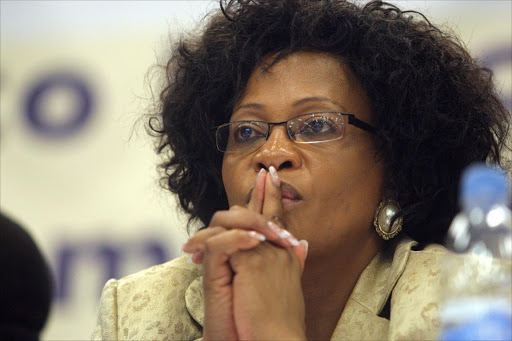 Western Cape Premier Helen Zille has lashed out at Water Affairs Minister Nomvula Mokonyane over her utterances on the province’s drought crisis.

The veteran DA politician also took aim at what she deemed the national government’s apparent disdain for the private sector‚ accusing the ANC-led state of entrenched Marxist tendencies.

Zille said Mokonyane had until recently been silent on the issue‚ which has gripped the Mother City since last year.

Cape Town’s use of the term “Day Zero” came under fire from water and sanitation minister Nomvula Mokonyane in Parliament.
News
4 years ago

“When she finally spoke publicly during the past two weeks‚ Nomvula Mokonyane blamed the City for the crisis‚ and rubbished the concept of Day Zero‚ because‚ she said‚ it sounded ‘defeatist‚’” Zille wrote.

“It had been invented‚ she suggested‚ as a ‘PR’ concept‚ so that people could make money out of the water shortage. The minister’s speeches sounded as if they had been scripted by Bell Pottinger.”

Cape Town’s use of the term Day Zero came under fire from Mokonyane in Parliament last week when she briefed the portfolio committee on water and sanitation.

Day Zero refers to an emergency water-saving plan that will lead to most taps being turned off in Cape Town. But Mokonyane suggested that the term had not been sanctioned by the National Disaster Management Centre. She pointed out that other parts of the country had also been hit by severe dry spells‚ adding that some areas in the North West had not had water in three years.

That did not sit well with Zille‚ who posited: “A simple question to the minister: If Day Zero is a figment of a PR consultant’s imagination‚ why does the Inter-ministerial Task Team intend to declare the drought a ‘national disaster’ during the coming week?

“There are two answers to this question: Because the situation is serious (which it is); and Because the national disaster declaration brings the drought crisis under the national government’s control (which contains as many risks as benefits to water users).”

Zille accused Mokonyane of vilifying the private sector for trying to make the best out of a bad situation.

“In her speeches (last) week‚ it became clear that the minister is determined to pre-empt what she defines as the ‘commodification’ of water. In other words‚ she wants to prevent a water economy developing to provide sustainable solutions to the crisis where the state has failed‚” Zille said.

“The minister continued to paint them as opportunists seeking to profit out of a crisis‚ rather than innovative thinkers who are prepared to take a risk on a good idea (in competition with other good ideas) to solve public problems‚ strengthen the economy‚ and create jobs.

“It is frightening to see‚ again and again‚ how much the government’s economic analysis is still anchored in Marxist assumptions.

“It is for this reason that the generous donation by farmers of vast quantities of water from the Eikenhof dam did not escape criticism either.

“They were at the receiving end of a tongue-lashing at the Parliamentary portfolio committee on Water and Sanitation‚ which included calls for nationalising the land on which private dams are situated‚ to expropriating the water inside the dams.”