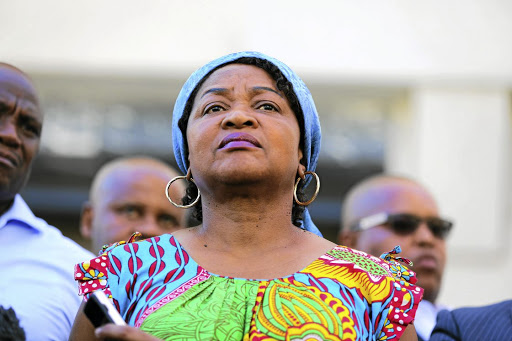 Speaker of the National Assembly Baleka Mbete is currently consulting on a request from EFF leader Julius Malema to bring forward the party’s scheduled motion of no confidence in President Jacob Zuma.

Deputy Speaker of the National Assembly Lechesa Tsenoli‚ on behalf of Mbete‚ said on Monday that reports that Mbete had rejected the EFF’s request to reschedule the no-confidence motion to Tuesday were “false”.

Tsenoli said that in a letter to Malema and the EFF’s attorneys‚ Mbete had stated that she was currently consulting on the request to reschedule the motion and would revert after this.

The Rules of the National Assembly entailed consultation with relevant structures‚ including the chief whip of the majority party and the leader of government business‚ he said.

Opposition parties in Parliament have called for the motion of no confidence in President Jacob Zuma‚ scheduled for February 22‚ to be brought ...
News
3 years ago

Tsenoli said Mbete had originally scheduled the motion for February 22. This was after consulting with the chief whip of the majority party and the leader of government business and obtaining confirmation for the February 22 scheduling from the National Assembly programme committee.

“In her letter today‚ Ms Mbete said she was currently consulting on the request and would revert to Mr Malema.

“Reports that the Speaker had rejected the EFF’s request to schedule the Motion of No Confidence on 13 February are‚ therefore‚ false‚” Tsenoli said.

Malema said earlieron Monday that the motion of no confidence must take place this week‚ threatening legal action if Mbete failed to respond to the EFF’s request by 10am on Tuesday.

“By tomorrow 10 o’clock if Baleka has not responded‚ the EFF is going to launch an urgent application in court because we are in a crisis‚” Malema said.