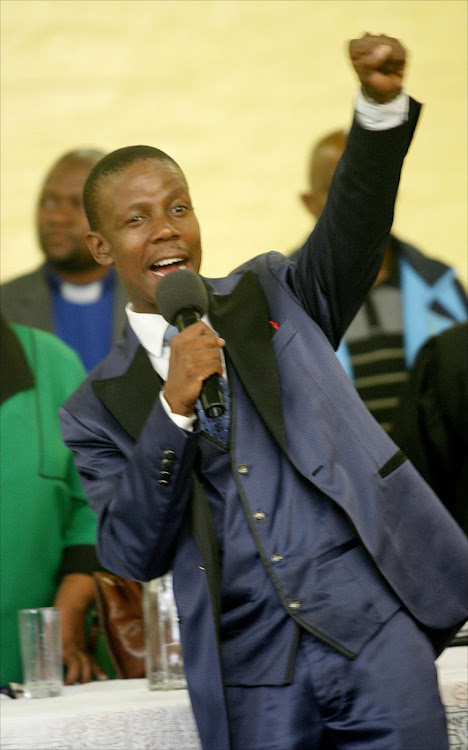 As heavy rain is predicted across the drought-stricken Western Cape late on Friday‚ Pastor Mboro says it is thanks to his prayer for rain that has made God "provide for the people."

Mboro went to Cape Town this week and embarked on 90 days of prayer‚ claiming that the Western Cape had been in drought because people had turned to science instead of God.

He said the fact that rain was now predicated cemented his status as a prophet as he knew he has direct access to God.

"It's a confirmation that I am a true prophet and whatever that I have promised Cape Town has come to pass. God answered my prayers and many people witnessed that."

Mboro‚ who was in Cape Town on Wednesday‚ insisted that the water situation still appeared dire until he was in the city and prayed.

"When I got to Cape Town it was blazing hot with no sign of the rain. I started praying and clouds gathered. It was very cloudy then it began to drizzle."

He has still lambasted citizens‚ explaining that despite the fact that he urged them to rally in prayer‚ they were going about their daily lives.

"I thought I would find people standing at the corners of the streets and around the sea praying. But people were minding their own business. My crew and myself were praying and that is why the rain has come."

He said his ability to get rain after praying should've been more celebrated‚ but people don't seem to believe in his ability.

"They said I'm bringing rain to Cape Town sarcastically‚ but after the rain no one called me for an interview. I should have been on television but no one bothered because no one saw it coming."

He said he has now returned to Joburg because his mission is complete.

Pastor Mboro has called on South Africans to join him in a 90-day prayer for rain in Cape Town.
News
3 years ago

The controversial Limpopo "Doom Pastor" was yesterday reprimanded in the packed Mookgophong Magistrate's Court for chewing gum during court ...
News
3 years ago

Controversial Pastor Patseka Mboro Motsoeneng will appear in the Palm Ridge Magistrate’s Court next year on charges of common assault.
News
4 years ago
Next Article