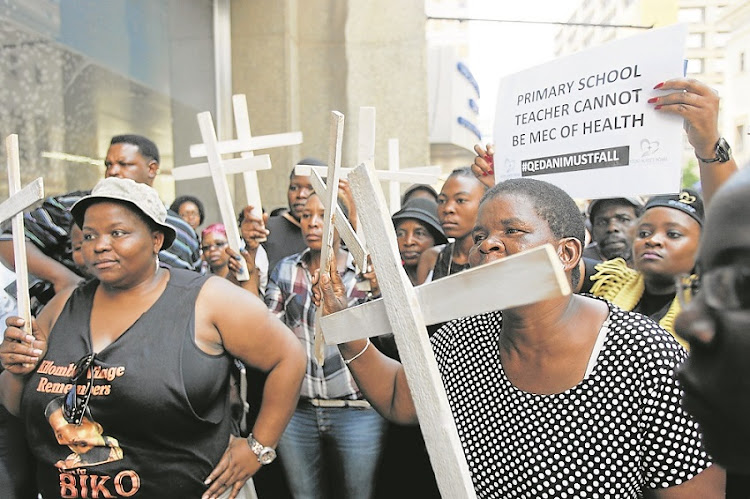 Esidimeni Family members of psychiatric patients who died earlier this year hold an ‘Esidimeni 37’ prayer vigil outside Gauteng Health MEC Qedani Mahlangu’s offices. The 37 patients died after being transferred from Life Esidimeni into the care of NGOs. Findings of the investigation into the tragedy would be released next month, health ombudsman Professor Malegapuru Makgoba said.
Image: Antonio Muchave ©Sowetan

The state wants the Life Esidimeni arbitration to disregard the torture suffered by deceased psychiatric patients when awarding compensation to aggrieved families.

The state and Section27 which represents 74 families agreed on R200 000 to compensate relatives for emotional shock and funeral costs. However the families also want to be compensated for constitutional damages which the state has disputed.

Advocate Tebogo Hutamo submitted closing arguments on behalf of the state during the hearing today.

Hutamo said evidence in relation to how patients were tortured and starved to death should was irrelevant.

He said consideration should only be given to the emotional trauma experienced by families and not the human rights abuses suffered by the dead patients when determining compensation.

Hutamo justified this by saying relatives were the ones seeking compensation and not the dead patients.

"But that trauma can only occur from the horrible deeds isn't it? Are you saying the suffering of the deceased is irrelevant? That is an incredible proposition. It startles me" Moseneke said.

He said they did not dispute the fact that patients had been violated but said this did not mean that their relatives were entitled to constitutional damages.

The arbitration was called following the release of a damning report by South Africa's health ombudsman Professor Malegapuru Makgoba which exposed harrowing details of how patients died.

Gauteng premier David Makhura says he accepts responsibility for the Life Esidimeni tragedy where more than 100 mentally ill patients died after being moved from the hospital to NGOs. Makhura said...