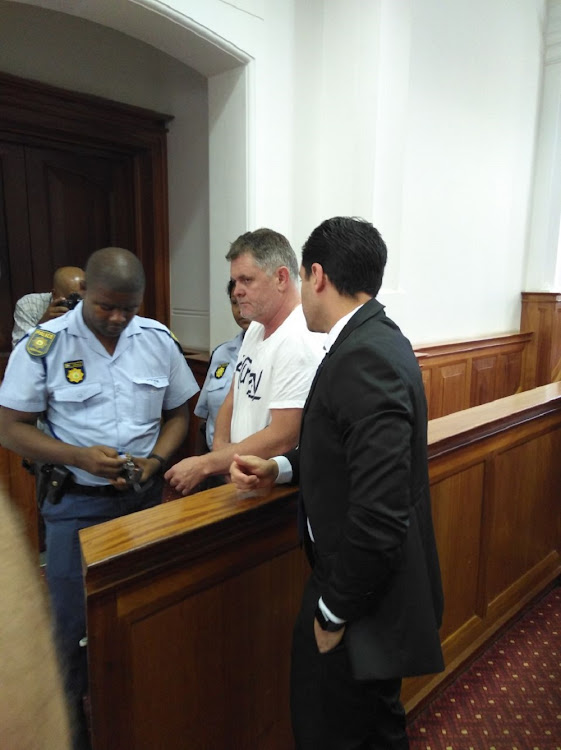 Jason Rohde arrives in the High Court in Cape Town on Wednesday wearing a T-shirt and shorts.
Image: Philani Nombembe

Murder accused millionaire Jason Rohde’s “severe‚ major depression episodes” could have been caused by his inability to maintain a strong façade for his children.

This was the testimony of his psychiatrist‚ Dr Kevin Stoloff‚ during an inquiry into the businessman’s breach of his bail conditions in the High Court in Cape Town on Wednesday.

Rohde was supposed to appear in court on Monday for the recommencement of his trial‚ which was adjourned in November. His legal team said he had been admitted to the Crescent Clinic‚ a private hospital in Kenilworth‚ Cape Town‚ and asked for a seven-day postponement. They handed in three medical reports about his health but the court was not persuaded and issued a warrant for his arrest.

According to his counsel‚ police wheeled a sedated Rohde out of the clinic in a wheelchair on Tuesday and transported him to Stellenbosch‚ where he was locked up in a police cell after Judge Gaayat Salie-Hlophe issued a warrant for his arrest.

He arrived in court on Wednesday unshaven‚ dressed in shorts and T-shirt‚ and handcuffed.

Testifying about Rohde’s condition‚ Stoloff said the former property company boss had struggled to show a brave face to his three daughters during the trial’s two-month break.

Jason Rohde arrived in the High Court in Cape Town in handcuffs on Wednesday.
News
4 years ago

“He feels at times that life is not worth living. I am worried about the risk to self‚” he said.

Stoloff said Rohde was not malingering and wanted to have the trial concluded as soon as possible. Rohde’s arrest at the clinic could affect his treatment.

“I think it significantly prejudices and undermines his treatment. And I wondered if he would be safe in a police cell‚” he said. “I felt it was irregular.”

The businessman’s advocate‚ Pete Mihalik‚ described Rohde’s arrest as unconstitutional. “He is before court on the basis that this court issued a warrant for his arrest. He was taken out of hospital‚ on medication‚ into a police cell‚” said Mihalik.

Prosecutor Louis van Niekerk suggested Rohde remain under Stoloff’s care until a bed was available at Valkenberg Psychiatric Hospital. “I am informed by my office that a bed may be available in two weeks’ time‚” said Van Niekerk.

Rohde is charged with murdering his wife‚ Susan‚ and obstructing the administration of justice by making her death look like a suicide. They have three daughters.

The former Lew Geffen/Sotherby’s International Realty chief executive was sharing a room with his wife at Spier wine estate‚ near Stellenbosch‚ in July 2016 when she was found dead with the cord of a hair iron around her neck behind the locked door.

“The post-mortem examination conducted on the body of the deceased shows the cause of death as consistent with asphyxia following manual strangulation and external airway obstruction‚” says the indictment. “The features of the ligature imprint abrasion mark are consistent with post-mortem application to the neck.”