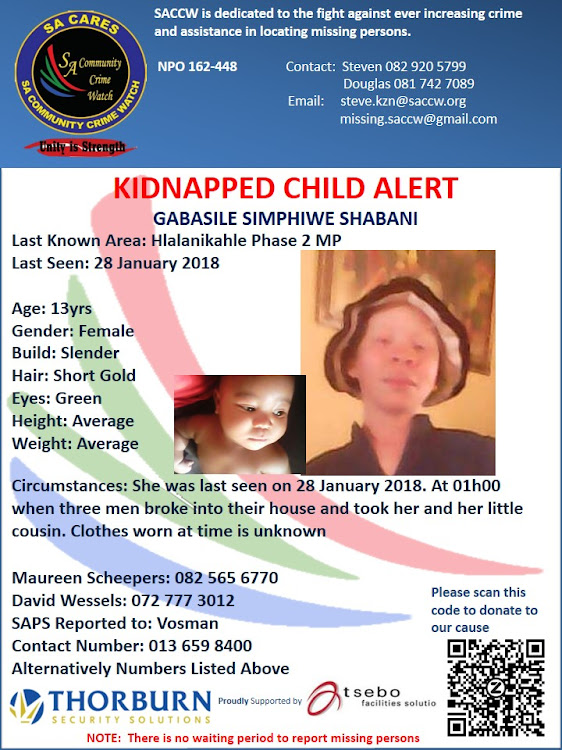 A 13-year-old girl who was snatched from her bed in Hlalanikahle‚ Witbank‚ two days ago may have been the victim of a calculated‚ well planned abduction.

Anna Shabani said she had noticed a man watching her daughter Gabisile‚ as she walked back from school for several days in a row.

She had never seen the man in the area before this‚ neither had she bothered to ask why he was loitering close to her home‚ Anna's nephew Simon‚ told TimesLIVE.

"I was told that this person would stand facing the door of the house‚" Simon said.

Now the family is wondering whether the same man could have been involved in the kidnapping of the little girl as well as her one-year-old nephew.

In the early hours of Sunday morning‚ 50-year-old Anna woke up to the sound of glass shattering.

She went to check and found that the one window which did not have burglar bars had been broken and before she knew it‚ there were three men inside her house.

"I tried to scream and ask for help but they came in and pointed a gun at me. I ran back into my room and tried to close the door but they shoved it and overpowered me‚" Anna said.

One of the attackers pointed a gun at her and covered her mouth while the other headed to the bed and grabbed Gabisile‚ who is a twin.

I told her that these men have taken Gabisile. She said ‘they took my child too

Gabisile had lay sleeping on her bed while her sister slept in another room with Anna's grandchild.

Unlike her twin sister Khanyisile‚ Gabisile was born with albinism.

"I'm not sure whether she was still asleep at the time [she was taken] because the light was still off‚" Anna told TimesLIVE.

"But she didn't scream or cry."

The SA Community Crime Watch's Maureen Scheepers said her group had been circulating pictures of the missing girl and working with police in their investigation.

Scheepers said the little girl had been wearing only her underwear when the assailants fled with her.

As the attackers rushed out of the house‚ Gabisile's 18-year-old sister Nompumelelo‚ who had been sleeping in a separate bedroom with her 15-month-old son‚ Nkosikhona Ngwenya‚ emerged from her room.

"I told her that these men have taken Gabisile. She said ‘they took my child too’‚" said Anna.

The family called out to neighbours for help and a manhunt ensued.

Two days later and they still have no leads.

Anna said she had no idea why her daughter and grandson were taken.

Simon said it had crossed their minds that Gabisile was taken because of her albinism.

"We have just finished compiling the identikit and we will be releasing it soon‚" Mtsholi said.

Scheepers said when she asked the family to describe the suspects‚ they said they were not South African.

Nompulelo said the abductors were speaking in English and had told her to “freeze” and give them the baby.

The family was patiently awaiting any news.

"Everyone [in the community] is shocked by this. You hear of children going missing but this is something else‚" said Anna.

The four men who were arrested in connection with the alleged attempted murder and kidnapping of Mzwandile Ntuli have been released from custody.
News
4 years ago

A Soweto mother yesterday relived the horror of the night her 14-month-baby was kidnapped during a house robbery in 2016.Testifying in the Protea ...
News
4 years ago
Next Article