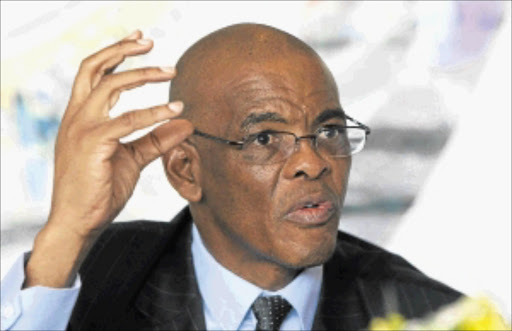 The Democratic Alliance will table a motion of no confidence against Free State premier Ace Magashule in the provincial legislature‚ DA leader Mmusi Maimane said on Sunday.

He made the announcement during the Free State leg of his People’s Forum Tour in Botshabelo.

“The DA caucus will meet on Tuesday to finalise the details of such before informing the Speaker of the Legislature. This beautiful province cannot go a day longer with Ace Magashule at the helm‚” Maimane said.

The DA leader accused Magashule and “his corrupt friends” of stealing over R200-million from a group of aspiring black farmers.

“Last year I visited the Estina Dairy Farm in Vrede‚ where a government project aiming to empower local residents and boost provincial agriculture through the establishment of a large scale dairy farm was set up in 2013 by the Free State Government‚ The community based project‚ which targeted almost 100 intended local beneficiaries‚ was a joint private-public project between the Free State Department of Agriculture and Gupta-controlled company Estina. And that’s when it became clear the project wasn’t about the community of Vrede.

Newly-elected ANC secretary-general Ace Magashule waxed lyrical on issues of unity within the ruling party at a Youth League event in ...
News
3 years ago

“This was a devious scheme thought up by those who represent the ANC – Ace Magashule‚ Mosebenzi Zwane and their fellow comrades – to steal public money to pay for a Gupta wedding in Sun City‚” Maimane charged.

“The Premier of this province‚ Ace Magashule‚ not only knew about this from day one – he was actively involved in the project. He cannot continue to be in charge of a province when we know he has been working behind the backs of the people of the Free State to make him and his friends rich‚” Maimane added.

He said the DA welcomed the recent move by the Hawks to seize control of the farm‚ and to search the offices of several Free State Government officials – including the premier.

“This work by the Hawks must continue‚ and those found guilty must be put behind bars. But for now‚ we must remove Ace Magashule before many more people of the Free State fall victim to his sinister ways.”