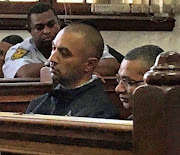 How did a man who was arrested for possession of illegal firearms know that police would allow him to get bail eight days before he was even arrested? An alleged gang boss told him.

An affidavit written by alleged Cape Town extortion racketeer Grant Veroni at the Goodwood police station on January 12 prophesises his own arrest and release on a meagre bail sum.

The affidavit was presented to the Cape Town Magistrate’s Court by Advocate Bruce Hendricks during the bail application for five men‚ including Hendricks’ client‚ Colin Booysen‚ and Nafiz Modack‚ who is alleged to be running a massive national extortion syndicate.

Hendricks has been cross examining the investigating officer in the case‚ Colonel Charl Kinnear‚ over evidence he lead in court in an attempt to prevent the five suspects from getting bail.

Hendricks accused an allegedly corrupt faction in the police - run by Major-General Jeremy Veary - of serving Mark Lifman and alleged Sexy Boys gang boss Jerome “Donkie” Booysen’s interests when they arrested Modack‚ Booysen‚ Ashley Fields‚ Jacques Cronje‚ and Carl Lakay just before the festive season. This because the group - of which Modack is allegedly the boss - was in competition with Lifman‚ who controls security at nightclubs across Cape Town.

Numerous night club owners in the city centre have confirmed to the publication that they pay money to security groups belonging to either Lifman or Modack - and that they had no say whether or not they wanted their services.

They did not want to be identified because they fear for their lives and the safety of loved ones‚ some stating‚ “I have a wife and children...” before tailing off.

Veroni claims in the affidavit that he was contacted by controversial Cape Town businessman Lifman on December 26 and told that should he write a statement revealing the extent of Booysen’s criminal exploits. He would then ensure that “his police” would not oppose bail after they arrested him.

He said that he was contacted by “a member of a faction wanting to take over the security industry” shortly before Lifman called him. It is understood that he was referring to “Donkie” Booysen.

“This person then contacted Mr Mark Lifman. Mr Mark Lifman then told me on the phone he knows about the warrant of arrest members of the Cape Town Cluster Unit has for me‚” reads the affidavit.

Veary is the head of the Cape Town Cluster Unit and also the man driving the investigation relating to the group’s alleged extortion of the Grand Cafe in Greenpoint. Veary‚ who was present during Hendricks’ testimony‚ smiled sheepishly and shook his head in denial at the allegations.

“He informed me further that he can assist me with the case (and) he wants me to give evidence and make a statement against Mr Colin Booysen and others whom is currently appearing in the Cape Town Magistrates Court 16 on a charge of extortion‚” said Veroni in the affidavit.

“He informed me that his police were at my house on 25 December 2017 Christmas Day but I was not at home‚ I informed him that I was at my mother’s house at the time. He told me if I make a statement he can relocate me and my family and also he will make sure I get R1000 bail in the matter they have a warrant for me‚” said Veroni.

He said that Lifman then gave police detective Sergeant Edward Edwardes his wife’s cellphone number and Edwardes then called sent WhatsApp messages to her to arrange Veroni’s arrest at his home.

Veroni was released on bail on Tuesday for R3000 after he was arrested on Monday. It was his third arrest in less than a year.

A source claims that he made a deal with Lifman that he would make a statement once he was released on bail‚ but that he never delivered on the promise.

The case continues on Friday.