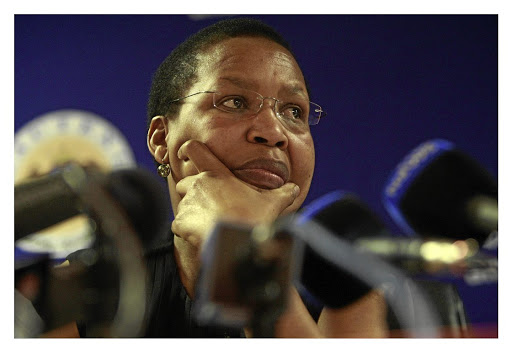 Former Gauteng health MEC Qedani Mahlangu will face up to tough questions when she finally appears before the hearings into the deaths of mentally ill patients in the Esidimeni tragedy./ELIZABETH SEJAKE

Former Gauteng Health MEC Qedani Mahlangu does not accept that she brought "so much pain and anguish and disrepute to our nation" and that was she "negligent" – both accusations leveled at her by the health ombudsman.

She was being cross-examined at the Life Esidimeni hearing on Monday. The hearings aim to find out why the tragedy‚ which led to 143 deaths‚ took place.

Health ombudsman Malegapuru Makgoba investigated the Esidimeni saga‚ releasing his report on February 2017. He found the former MEC was one of the three decision makers pursuing "a flawed and an irrational decision" to close the Life Esidimeni homes down.

He accused Mahlangu of "poor planning‚ hurried and chaotic execution‚ poor oversight‚ a refusal to listen and take advice and warnings from professional experts and …organisations".

During cross-examination on Monday‚ she was asked about Makgoba’s conclusions in what was a lengthy exchange.

Mahlangu replied: "I cannot take a view on legal issues."

Hassim told her it was not a legal view that she required‚ but rather that she wanted Mahlangu's opinion on the report.

Hassim asked: "Do you agree [with the findings]?"

Mahlangu replied: "I commissioned the [ombudsman's] report because I had thought things had gone really wrong."

Hassim asked her: "But do you agree?"

Mahlangu said: "I have expressed my severe condolences. Any loss of life is regrettable. I want to say how sorry I am."

Hassim asked her again if she accepted the ombudsman's report.

Mahlangu replied: "Government accepted the report. I am no longer part of government."

Hassim persisted: "Do you accept the findings of the report? It (the question) calls for a yes or no."

Mahlangu repeated: "I have indicated how the loss of life is regrettable. Things did go wrong."

Hassim then asked: "Could you please answer the question as to whether you agree with the findings?"

Mahlangu said: "I note the findings. I am the person who commissioned the report in first place."

Hassim then asked: "Do you agree that ombudsman made findings against you in his report""

Eventually‚ Mahlangu finally answered the question and said: "I do not agree with his findings as addressed to me personally."

Mahlangu's explanation as to why she was not negligent was she that was political head of the health department‚ not the administrative head. This meant that she didn’t implement the project on a day-to-day basis.

She‚ however‚ said she felt resigning as MEC the day the report was released showed that she took responsibility for the deaths.

"I know that we may not bring them back but for what is worth I am really really sorry." Those are the words of former Gauteng Health MEC Qedani ...
News
3 years ago

"She is a murderer."
News
3 years ago

Qedani Mahlangu is on Monday scheduled to appear before the Esidimeni arbitration hearings.
News
3 years ago

Mahlangu back in SA to testify at Esidimeni hearings

Gauteng's former health MEC Qedani Mahlangu recently returned to South Africa from London‚ where she is studying.
News
3 years ago
Next Article