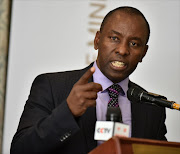 Image: Freddy Mavunda High level Free State politicians‚ including Mosebenzi Zwane‚ visited the Gupta compound in Saxonwold days before funds started flowing to the Vrede Dairy Farm Project‚ which has been exposed to have been a looting ground for the Gupta family.

High level Free State politicians‚ including Mosebenzi Zwane‚ visited the Gupta compound in Saxonwold days before funds started flowing to the Vrede Dairy Farm Project‚ which has been exposed to have been a looting ground for the Gupta family.

The Sunday Times revealed this weekend that of R220-million paid by the Free State department of agriculture to Estina in support of a dairy farming project meant to uplift the poor‚ only R2-million was used to pay for services relating to the farm.

This stems from court papers filed in support of a preservation order application by the NPA's Asset Forefeiture Unit on Thursday last week.

In June 2017‚ The Times reported on a string of visits by high level politicians and state officials to the Gupta family home in Saxonwold. The meetings were found scheduled on the Outlook calendar of Sahara Computer’s CEO‚ Ashu Chawla.

Among these visitors was Zwane‚ then the MEC for rural development and agriculture in the Free State‚ who was scheduled to meet Tony Gupta on April 6. The first payment was made to Estina on April 18.

The Gupta’s entertained other visitors that day – including Free State department of agriculture head Peter Thabethe and MEC for Treasury in the Free State Elzabe Rockman.

All three declined to comment when approached in June last year. Email and text queries sent to a spokesperson for Zwane this weekend were not responded to and Thabethe also did not respond to detailed questions.

A spokesperson for Rockman said on Sunday that the provincial treasury had seen media reports pertaining to the preservation order but had yet to see the papers‚ and would only comment once they had received it.

They did not respond to specific questions over the visits to the Gupta homes.

At least R180m flowed to Gupta companies or individuals linked to the family‚ according to the court papers.

R10-million was paid directly to Atul Gupta by Estina.

The details are revealed in affidavits attached to a preservation order applied for by the Asset Forfeiture Unit (AFU)‚ which was on Thursday granted by the Bloemfontein High Court which this publication has seen.

The Sunday Times report details how investigators with the AFU found that R19-million had been paid to Stanlib for a fleet of luxury cars and R30m had been diverted to be used as a down payment on the Gupta’s now infamous Bombardier private jet‚ ZS-OAK. Data from the leaked Gupta emails show that the same day R10-million from Estina found its way into Atul Gupta’s personal bank account. It was moved out again almost immediately. Contained in the emails are thousands of daily bank transfer approval requests.

On December 20 2013 key Gupta man Ashu Chawla is asked to approve‚ among others‚ a transfer of R37.7-million from ‘AK Gupta’ to Islandsite Investments.

From there‚ the funds are moved yet again.

R23m is paid from Islandsite to Oakbay‚ the flagship company. Oakbay then pays the same amount on to JIC Mining Services‚ the largest company within the mining division of Oakbay Investments.

Over the next few weeks multiple payments are made from Sahara’s account to various suppliers and other Gupta businesses.

A further R13m is moved from Oakbay to Islandsite to JIC on January 6 2014 and a week later R3m is moved from Aerohaven Trading‚ another company that Estina monies was paid to‚ to Oakbay and again on to JIC. From there the trail grows cold according to data in the leaked emails.

No data is available to show where the money flows from JIC.

This type of money movement has been described by experts as ‘layering’ – an effort to move funds while obscuring the origin.

According to Oakbay financial statements mining‚ which includes JIC as the biggest money maker‚ contributed to 45% of Oakbay’s total R1.2bn revenue for the year ended February 2016.

Islandsite and Oakbay‚ in which President Jacob Zuma’s son Duduzane held shares‚ is among the companies now slapped with the preservation order.