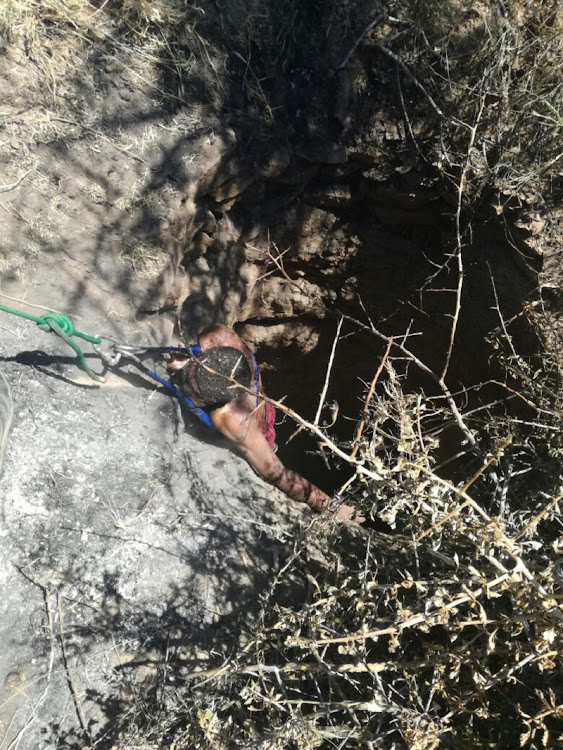 Two men were rescued from a water hole following a mob attack.
Image: SUPPLIED BY SAPS

Two men alleged to have been associated with a local thief targeting residents in the Moletjie Ditenteng district are lucky to be alive after they were assaulted and tossed into a well at the weekend‚ Limpopo police said.

"In what could be regarded as the most inhumane and barbaric incident‚ the community of Moletjie Ditenteng spotted two men from the adjacent village of ga-Mabiloane roaming the streets in the company of a person they suspected of being responsible for the spate of thefts of Plasma TV screens in their area and started mobilizing‚" said Brigadier Motlafela Mojapelo.

"They then grabbed the two men‚ started severely assaulting them and later threw them into an old water hole that was used to supply water to the local community."

Police officers responded to the scene. "The two victims could still be spotted from the deep hole. Members of the South African Rescue Service (SAR) and the EMS were summoned and on arrival‚ they succeeded in rescuing the two victims using their appropriate robes. They were taken to hospital for medical treatment‚" said Mojapelo.

While I believe that criminals must be punished harshly, I'm vehemently opposed to mob justice against suspected criminals.
Opinion
4 years ago
Next Article