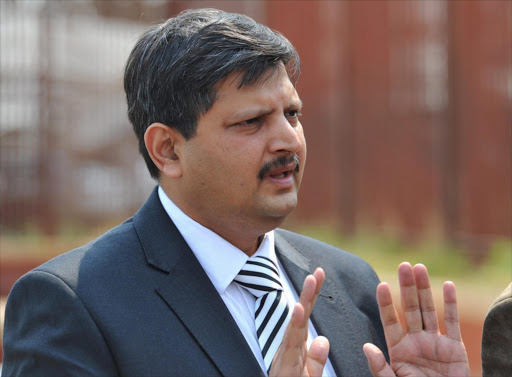 Estina‚ the company that ran the Gupta-linked Vrede Dairy Farm Project, had only R9‚000 in its bank account before the first payment of R34-million was deposited into it by the Free State department of agriculture.

Court papers filed by the National Prosecuting Authority's Asset Forfeiture Unit (AFU) last week in support of a preservation order have now shown the project was nothing more than a looting ground for the Gupta family and their associates – and that little to no oversight was exercised by the department over how the funds were being spent.

The Bloemfontein High Court on Thursday granted the order to freeze assets amounting to R220-million, including the Krynaauwlust Farm in Vrede in the Free State.

This is the first time evidence has emerged of Gupta benefiting financially from questionable deals with state departments or entities.

All told, the AFU has found that of the R220-million given to Estina for the project‚ only R2-million was actually spent on the farm. The rest was siphoned off to the Gupta family and their associates.

Maimane demands arrest of Zwane and Magashule over Estina saga

DA Leader Mmusi Maimane called for the arrest of government officials implicated in the capture of the Estina Dairy project.
News
4 years ago

Eugene Nel has been appointed curator of the assets and must within 40 days file a report containing a detailed inventory of the assets. Those affected now have 90 days to fight the order or allow their assets to be seized and sold off to recover the funds.

According to the papers‚ R220-million was paid into three bank accounts controlled by Estina over a 29-month period between April 2013 and May 2016.

Attached to the application is an affidavit by Samson Schalkwyk‚ a financial investigator with the NPA, who reveals that "through the entire process of the initiation of the Vrede farm project to the point where the department paid funds to Estina‚ there was apparent collusion between Estina's and the department's officials".

The affidavit adds: "The project was used as a conduit through which money was siphoned off from the department and into the accounts of parties who had no interest in farming."

An inquiry into KPMG South Africa and the work it did for the Gupta family has been postponed until further notice.
Business
4 years ago

The move is part of a crackdown on state capture and the second such preservation order to come to light this week.

The AFU hopes to recover R50-billion spread across 17 cases – six of which are before the courts, according to acting AFU head Adv Knorx Molelle‚ who revealed the staggering scope during a live interview on eNCA this week.

On Monday it emerged the AFU had in December applied for and been granted a similar preservation order against Gupta-linked Trillian and global consultancy McKinsey in which it seeks to recover R1.6-billion paid to the companies for a dodgy consultancy contract with Eskom.

Trillian‚ which was McKinsey's supplier development partner‚ was paid R590-million without a contract being in place. Eskom's contract with McKinsey was declared unlawful by subsequent investigators.

How the Guptas looted the Dairy Farm

Also attached to the preservation order is an affidavit by AFU financial investigator Nkosiphendule Mradla. He explains the money movement in great detail.

Mradla established that the sole director of Estina‚ Kamal Vasram‚ resigned in July 2015 and a new director, Soo Young Jeon, was registered.

Mradla also established there were seven tranches of payments to Estina from the Free State department of agriculture, totalling R220-million between April 2013 and May 2016.

Before the first payment of R34-million by the department to Estina‚ the company’s bank account held R9‚000.

In the next two days‚ the entire R34-million was transferred to the same Bank of Baroda account, and within two days‚ the funds were paid to the accounts of Gupta-owned Aerohaven Trading and Oakbay Investments.

The CEO of both of these companies is Ronica Ragavan.

R50-billion: The price state capture crooks will have to pay

The National Prosecuting Authority is going after R50-billion worth of assets and cash they say was potentially illegally gained by the architects of ...
News
4 years ago

The following two tranches that totalled R49m followed much the same route. The money was paid to Estina, moved immediately to the same Bank of Baroda account and then paid out to various companies and persons, including R19-million to a Stanlib account whose primary business was selling cars and R23-million to Estina’s Standard Bank account.

Mradla confirms that the Free State provincial treasury paid the R84-million to the department also in three batches‚ specifically for the Estina project.

Estina‚ he says‚ only changed its core business description to agriculture and farming after it had entered into an agreement with the department.

“I further submit that there was no justification for the payment of R10-million to Atul Gupta as he had no interest in Estina nor did he provide any farming-related service to Estina or Vrede Dairy Farm‚” Mradla’s affidavit reads.

Much the same is said of all the funds that end up in Gupta business accounts. All told‚ R187-million was paid to Gupta companies which provided no services to the Estina project.

AFU pursuit of R50-billion in state capture cases is but the beginning of more explosive developments .
News
4 years ago

Of the R220-million paid to Estina by the department in support of the farm business‚ only R2-million was actually ever paid in respect of dairy- or farming-related activities.

Another R40-million was paid to Vargafield‚ a company whose sole director is Sanjay Grover‚ a man who has also appeared in leaked Gupta emails. The project coordinator‚ Chandrama Prasad‚ was also paid R2-million for his work on the project.

Prasad and Vargafield had the same address‚ according to Mradla.

“The department was unable to objectively ascertain how its funds were being spent and it’s unable to verify whether Estina has made any contributions to the project. It is evident that the department did not receive value for money.

“All the amounts paid above for other purposes other than dairy farming and/or agricultural purposes ... to the entities bore the intent to defraud the department and to directly benefit Estina and other related companies/individuals unlawfully‚” Mradla says.