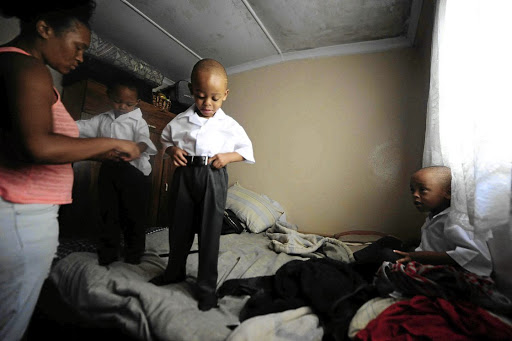 Triplets Reitumetse, Tumelo and Tumisang Mosito are helped to dress up by their cousin Kamogelo Mosito in preparation for their first day of school. The four-year-old triplets were born at only six months. / Thulani Mbele

It was a bittersweet day for thousands of parents - watching their children put on uniforms and over-sized backpacks to begin their schooling.

But, for Kgomotso Mosito the apprehension was tripled as she never thought she would see her children come this far after they were born premature. Three sets of uniforms, three pairs of shoes, and three backpacks were neatly placed in the living room before Tumelo, Tumisang, and Reitumetse Mosito woke up yesterday morning.

"I am excited and nervous for my kids because this is a new journey for them and this is the first step for them to learn independence," 43-year-old Mosito told Sowetan.

Her two sisters and niece helped getting the trio ready.

"This will be the first time for them being away from home without any of us being with them," she said.

"My pregnancy lasted for six months, but I had to spend a further three months in hospital because they were admitted into ICU after their birth."

Tumelo was the last to be discharged from hospital and had to be put on an oxygen tank because of breathing complications.

"Before they were born, the doctors told me one of them had died in my womb. He couldn't detect a heartbeat, but we later discovered that they were all okay. They are a blessing to my family," she said.

Mosito was not the only parent with more than one child starting their schooling at the same school. Grace Motseki, whose four-year-old twins began their schooling with the Mosito triplets yesterday, said: "At first I wanted to cry because Koketso and Kgothatso are small. I wanted them to go to creche but I can't afford it and that's why they are here to start Grade RR," Motseki said.

"I felt like I was leaving them with strangers but because I know the teachers here, I became more relaxed."