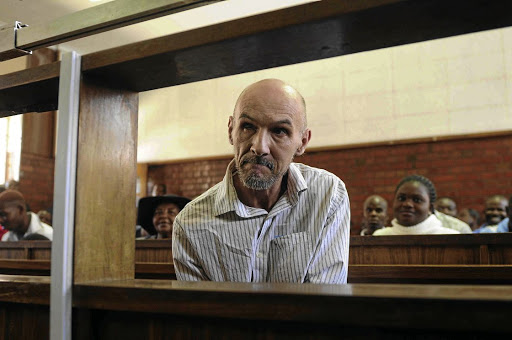 Willem Kroukamp, who is accused of raping a 41-year-old domestic worker, has had his case postponed in the Bronkhorstspruit Magistrate's Court. / Thulani Mbele

The family of a 41-year-old Bronkhorstspruit woman who was allegedly raped and forced to perform oral sex on two dogs is being kept in a safe house for her own protection.

A relative told Sowetan yesterday at the appearance of her alleged rapist Willem Kroukamp, 45, in the Bronkhorstspruit Magistrate's Court, that the victim was receiving psychiatric assistance.

He allegedly repeatedly raped the 41-year-old domestic worker before forcing her to perform oral sex on two dogs.

"There is an NGO [nongovernmental organisation] that is helping her recover from the ordeal .... she is doing well at the moment," the relative said.

The relative said the victim was left traumatised and suffered from insomnia and loss of appetite after the ordeal.

"She had a difficult time trying to understand what happened and why it happened to her. She would have nightmares. The first few weeks [after the ordeal] were hard."

Last month, the accused's family submitted a preliminary mental observation report which stated that Kroukamp needed to be admitted at Weskoppies Psychiatric Hospital in Pretoria for evaluation.

However, yesterday the state said it would oppose the application.

Investigating officer Sergeant Moses Mabena told the court that he did not suspect the accused suffered from a mental illness while being processed following his arrest.

He further told the court that Kroukamp was cooperative while being processed.

Mabena read out the statement given by the accused
after his arrest in which he
detailed what transpired on the day of the incident.

In the statement, the accused alleged that he had a sexual relationship with the victim and had never acted violently towards her.

Magistrate Frans Tsatsi postponed the matter to February 15 in order to subpoena the psychiatrist who compiled the preliminary report.