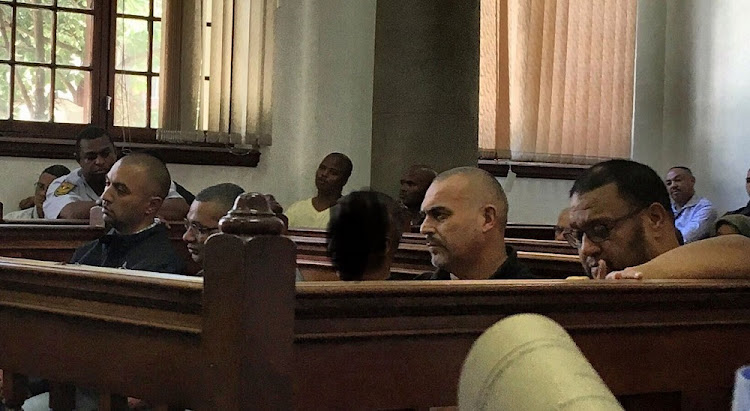 Modack‚ with Colin Booysen‚ Ashley Fields‚ Jacques Cronje and Carl Lakay‚ has been charged with eight counts of extortion and a count of intimidation relating to a complaint made by the Grand Cafe in Green Point.

In a bizarre attempt to exonerate his client from wrongdoing‚ Edwin Grobler played a recording to the Cape Town Magistrate’s Court on Tuesday which he claimed would make the state’s case against his client “crumble”.

The photograph of Duduzane Zuma and Nafiz Modack was taken at a Cape Town hotel in October.
News
4 years ago

The recording was of Modack calling the complainant in the case‚ Grand Cafe manager Radley Dijkers. Modack could be heard asking Dijkers whether he and Booysen were extorting him or threatening him.

Dijkers replied: “No! No! That’s what I told Leon yesterday! There was no intimidation at all.”

Modack‚ who is alleged to be running a syndicate with Booysen which is implicated in the murder of at least five people and numerous other assaults and stabbings‚ could then be heard saying: “No‚ I just wanted to make sure because people are saying I threatened you and that kak.”

Just as Lifman was famously photographed wearing a Jacob Zuma T-shirt at an ANC rally in 2014‚ on Tuesday Modack swapped the Polo sweater he wore during previous proceedings for an ANC-branded navy blue jacket.

The alleged mastermind of a Cape Town extortion racket appeared in court on Tuesday wearing an ANC jacket.
News
4 years ago

He and Booysen seemed jovial as Grobler played the recording during the cross-examination of Colonel Charl Kinnear‚ the investigating officer in the case‚ who for the past month has revealed the full extent of Modack’s alleged dealings in “taking over” Cape Town’s night club industry in an attempt to deny the five men bail.

Grobler asked Kinnear whether he had heard any intimidation‚ threats or extortion during the recording.

Kinnear said that while it was not evident on the recording‚ the conversation seemed to be “more of I’m telling you‚ not asking you”.

The context of the phone call also had to be taken into account‚ he said‚ as it had been made on November 7‚ several days before Dijkers made a statement to the police claiming the five men in the dock had demanded R90‚000 from him.

Grobler then put it to Kinnear that‚ “the recording shakes the foundation of your case”.

The bail hearing for five men accused of running the biggest extortion racket in Cape Town was due to resume in Cape Town Magistrate’s Court on ...
News
4 years ago

He said Modack had been told by a police officer that Lifman had put a price of R20-million on his head‚ asking Kinnear whether it would be unreasonable for him to have bodyguards. This was a reference to 13 armed men Kinnear claims are always around Modack.

Kinnear replied: “If Mr Mark Lifman put a hit on his head why would he go to Sea Point where Mr Lifman stays? I find it reasonable that any person would have bodyguards‚ but not that they would be heavily armed and block off a road in Sea Point with luxury cars to have lunch.”

He also questioned why Modack allegedly went to the Grand Cafe with a convoy of seven cars and 13 men to speak to Dijkers‚ who was the only person there‚ “when there was no threat”.

The bail hearing continues on Wednesday when cross examination is expected to resume.