If it were not for the intuition of a seasoned Tiso Blackstar photographer‚ the fate that had befallen Siam Lee might never have been known.

It was experienced lens woman Jackie Clausen’s curiosity that linked the discovery of a charred body in a sugar cane field in the KwaZulu-Natal Midlands to that of Lee‚ some 132km away from where she had disappeared in Durban North two weeks ago.

The mysterious vanishing of the 20-year-old exposed a secret brothel in a posh Durban neighbourhood. The Crawford College matriculant was last seen outside a house‚ barefoot and in a summer dress. Initial appeals by her family described an "abduction" from the house by a spurned lover.

According to a recent report by the Sunday Times newspaper, police and a team of private investigators established that Siam and her mother allegedly performed "sensual massages" in a room of the house.

Siam reportedly featured in an advert on an adult website, redvelvet.co.za, a portal which claims to make all manner of "fantasies come true". The site described her as a "stunning young college babe" who was available during business hours.

"Make all your fantasies come true with our very gorgeous and ready to please escorts and modles [sic] in South Africa. Redvelvet escorts give you the best in adult entertainment," it reads.

She did not, according to the site, offer "FH", understood to mean the full house of sexual encounters.

A source close to the investigation said Carmen had told one policeman that her daughter performed "happy endings", but did not have sex with clients. 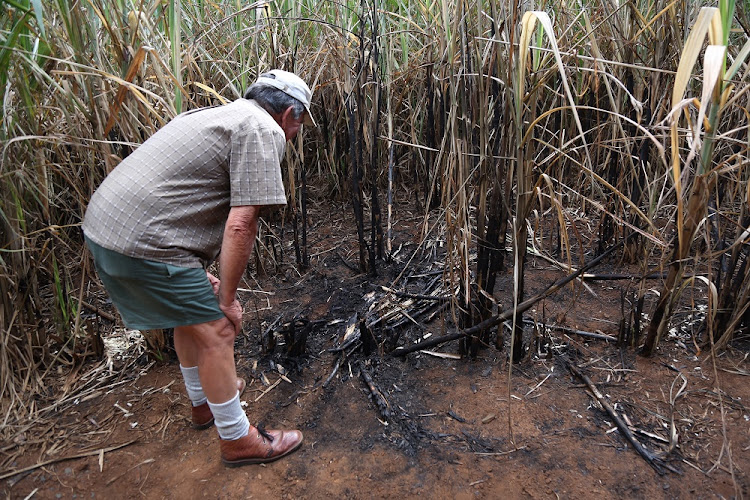 A farmer, who was on a fishing outing with his grandson, found the body of Siam Lee. Here he points out her final resting place in a field of sugarcane.
Image: JACKIE CLAUSEN

As appeals for information on Lee gained traction on social media platforms‚ Clausen had been assigned to cover a completely separate case: the bail application of murder accused farmer Philip Solomon in New Hanover.

On the fringes of the court case‚ she overheard the shop talk of two cops shooting the breeze about a grisly scene they had attended several days before.

Familiar with the search for Lee‚ Clausen listened intently‚ her interest piqued by a particular detail – the charred body they found in the field had a lip ring.

Armed with this information‚ and with all of the notes already developed independently on the story‚ the Sunday Times approached the investigating officer.

Had it not been for this connection‚ Lee would likely not have been identified by her family in the days that followed. Since her body was discovered‚ her mother‚ Carmen Nans Lee‚ was questioned by police and released without charge.

Police spokesman Lieutenant Colonel Thulani Zwane said that no arrests had been made.

The body of Siam Lee lay smouldering in her final resting place.
News
3 years ago

A family member has confirmed that a badly burnt body found in a secluded cane field near New Hanover in KwaZulu-Natal is that of Siam Lee.
News
3 years ago

Police are investigating whether the discovery of a body in a secluded KwaZulu-Natal Midlands farm district could be linked to missing Durban woman ...
News
3 years ago
Next Article