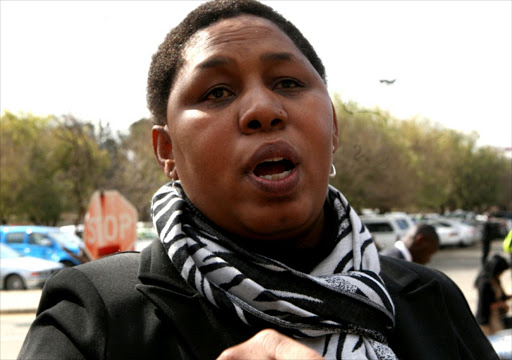 Deputy Minister of Social Development Henrietta Bogopane-Zulu has revealed her brother died in the Life Esidimeni tragedy‚ in a Facebook post that also explains how she lost a sister last week.
Image: MOHAU MOFOKENG

Deputy Minister of Social Development Henrietta Bogopane-Zulu has revealed her brother died in the Life Esidimeni tragedy‚ in a Facebook post that also explains how she lost a sister last week.

Bogopane-Zulu said on Facebook‚ on Saturday‚ that her sister had died on Friday morning after allegedly not being treated in the Baragwanath casualty ward for symptoms including diarrhoea.

"What breaks my heart is that she is the elder sister of our brother who died ESIDIMENI tragedy."

I am very angry, our sister died yesterday morning after sitting the whole night at the casualty at Bara without being...

"I am very angry‚ our sister died yesterday morning after sitting the whole night at the casualty at Bara without being attended too‚ despite vomiting‚ having diarrhoea to the point of lying there unconscious till she died."

It is unclear at this stage what happened at Baragwanath Hospital.

At least 143-mentally ill or intellectually disabled people died of neglect‚ starvation or pneumonia in 2016 when more than 1‚700 patients were moved from Life Esidimeni homes into so-called NGOs.

A member from an Esidimeni family committee confirmed to TimesLIVE that it was known that the deputy minister had a relative who had died during the scandal.

Bogopane-Zulu didn’t want to be treated differently because of her status as deputy minister and a member of parliament‚ said the representative‚ and as a result had kept the details about her brother's death under wraps.

The politician had been "in touch" with the Esidimeni family committee‚ said the representative.

Bogopane said on Facebook: "God give me the strength to be able to keep it together so I can support my family."

The deputy minister remarked that what has happened to her family happens every day to ordinary South Africans.

The Democratic Alliance's Jack Bloom used the post to draw attention to the fact that Baragwanath Hospital‚ the largest hospital in the Southern Hemisphere‚ had been without a permanent CEO for two years.

He called for an investigation into the incident that led to the death of the woman Bogopane-Zulu claimed was her sister.

"The previous CEO‚ Dr Sandile Mfenyana‚ was removed in January 2016 without explanation‚ and a permanent replacement has not been appointed despite promises by Gauteng Health MEC Gwen Ramakgopa."

Bloom asked "what is the reason for such a long delay in making a permanent appointment?"

He said four people had applied for the CEO post before the closing date of December 15.

"A dynamic and competent CEO needs to be appointed as soon as possible to effectively manage the hospital’s R3.5-billion budget and 6‚000 employees."