Prasa safety ban will stop many trains in their tracks 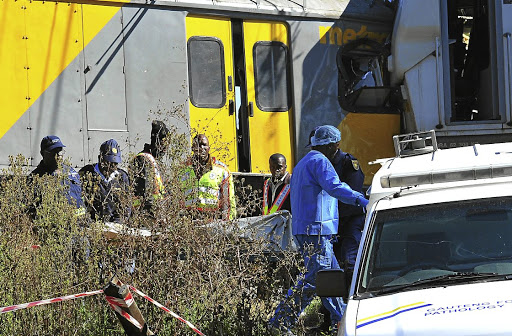 Police and a forensic team move the body of an unidentified man after two trains collided near the Elandsfontein station last year.
Image: VELI NHLAPO

The Passenger Rail Agency of SA (Prasa) has been accused of gambling with thousands of commuters' lives by using cellphones to communicate during manual authorisations of trains' movements.

This safety failure was among the reasons the Rail Safety Regulator (RSR) imposed an immediate ban on Prasa and told them to stop using manual signalling after a series of train collisions attributed to human error.

On Tuesday, at least 200 people were injured when a train was authorised to be stationary in Germiston but another Metrorail train carrying commuters on the same track hit it from behind.

The Germiston train crash on Tuesday has prompted the Railway Safety Regulator (RSR) to issue the Passenger Rail Agency of South Africa (Prasa) with ...
News
4 years ago

Yesterday, Prasa officials were in a scramble at an emergency meeting with the Department of Transport to seek the immediate lifting of the ban because it would negatively affect its operations and the mobility of commuters.

The regulator's spokeswoman, Madelein Williams, said the ban "must be interpreted against the backdrop of Prasa experiencing problems with their radio telecommunications systems and staff making use of cellphones, high vacancy rates, especially within safety critical grades, and general supervisory concerns".

She added: "The Rail Safety Regulator is concerned that the prohibition directive will bring about additional delays to trains and passengers ... [the decision] was not taken lightly, however, but due to various issues of this nature, we felt it prudent to take this action."

The driver of a Shosholoza Meyl train that derailed after colliding with a truck near Kroonstad on Thursday says he is alive only by the grace of God.
News
4 years ago

Williams said another collision of two trains in Elandsfontein on June 19 last year, forced a similar ban in the Gauteng region, which was later lifted.

"In response to [that] directive, Prasa Rail issued correspondence to the regulator undertaking to ensure safe train operations during degraded conditions," Williams said.

She said the collision in Germiston was the last straw.

It convinced the regulator that Prasa did not have the means to prevent accidents when manual authorisations were undertaken.

Williams added that the regulator's main concern was the recent escalating number of incidents when trains were manually authorised.

The clean-up operation at the site of Thursday’s horror train smash near Kroonstad in the Free State which claimed the lives of 19 people has been ...
News
4 years ago

"The material conditions on the ground will prompt a huge backlash from the public that might result in trains being set on fire. Millions of passengers who have bought tickets, which are the only tickets they can afford, will be severely affected."

He said Prasa respected the authority of the regulator "but we believe that RSR should have still given notice before issuing a prohibition".