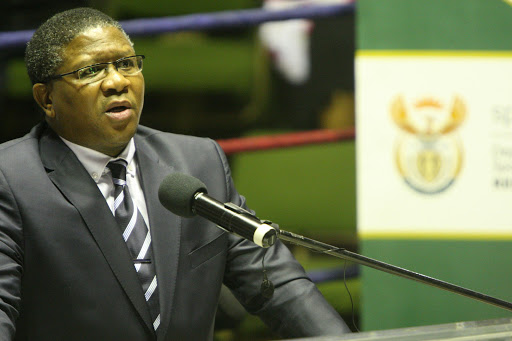 North West police are searching for 50 people suspected to be behind the torching of six buildings in the Rustenburg CBD.

North West police are searching for 50 people suspected to be behind the torching of six buildings in the Rustenburg CBD.

Police say the buildings were burnt on Wednesday night by local taxi operators who went on a rampage against drug dealers and sex workers in the area.

Residents claim the targeted properties house drug peddlers‚ while others operate as brothels and target girls. The community claims the police have failed to shut down such sites‚ hence they called on taxi operators to remove suspected offenders.

Police Minister Fikile Mbalula condemned the acts of violence and urged officers to root out criminality‚ in particular brothels‚ where the future of young women is destroyed.

"No matter how justified people might think they are‚ taking the law into their own hands does not make them different to the people they accuse of being criminals. People must know we are a democratic state‚ with competent institutions that could resolve all concerns‚" Mbalula said in a statement issued on Thursday.

Rustenburg came to a standstill on Wednesday afternoon as more than 50 community members went on a rampage‚ burning buildings that are believed to be ...
News
4 years ago

An off-duty police officer was arrested for possession of drugs in Rustenburg. The officer was allegedly found in one of the suspected drug dens. He is expected to appear in court soon.

North West police spokesman Brigadier Sabata Mokgwabone said calm has been restored in the CBD and officers have been deployed in identified spots to contain the situation.

"Police are on the ground and we are appealing with members of the public to work with us in the fight against crime. Taking the law into their own hands is not solving the problem. Let us work together to deal with all issues affecting our community‚" said Mokgwabone.

Taxi services have been affected in most parts.

Several people have taken to social media to express their views about the Rustenburg violence.