Water supply to the Vaal cut off 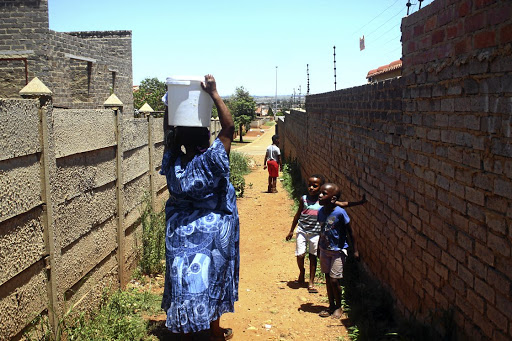 A pair of kids look with amazement at a woman carrying home a bucket of water she collected from a burst pipe in Sebokeng in the Vaal. / KABELO MOKOENA

Thousands of residents in the Vaal have had to face the heatwave with dry taps after their water supply was cut off due to nonpayment.

There was not a drop of water in most parts of Sebokeng, Vanderbijlpark, Vereeniging and Evaton for four days.

Emfuleni municipality spokeswoman Lebo Mofokeng said yesterday the water cuts came after there was a "water pressure reduction to 40%" due to a shortfall of R50-million in payments made by the municipality to Rand Water for its bulk water supply.

Rand Water, which had in the past threatened to cut water supply to defaulting municipalities, was expecting R200-million from Emfuleni on December 31. The municipality only managed to pay R150-million, Mofokeng said.

Sebokeng, the largest township in the Vaal, had already been getting water supply only at night for almost a year.

"It's been a year now with our taps only giving us water in the evening. The last four days we've had no water at all," Moshugi said.

She now has more than 100 bottles filled with water stacked in the backyard of her four-roomed home.

"We've been struggling due to lack of water. I had to be creative so that I don't run out of water when taps run dry."

Another Sebokeng resident, Thembi Sithole, 48, said a leaking water pipe which has been her source of water since Friday also ran dry yesterday while she was midway through doing her laundry near the pipe.

"Today (yesterday) is the worst day of them all. We don't even have water for bathing. We don't know what to do."

Sithole said they've had to choose between cooking, flushing toilets and bathing.

Other areas affected by the water crisis include parts of Sharpeville, Roshnee, Dadaville, Palm Springs and Three Rivers.

Five water tankers were the only contingency solution the embattled municipality could come up with to bring water to the people.

Mofokeng urged residents to "take advantage of the indigent policy" and update their status to enable the municipality to receive the "correct equitable share" from national government to make bulk water service payments.